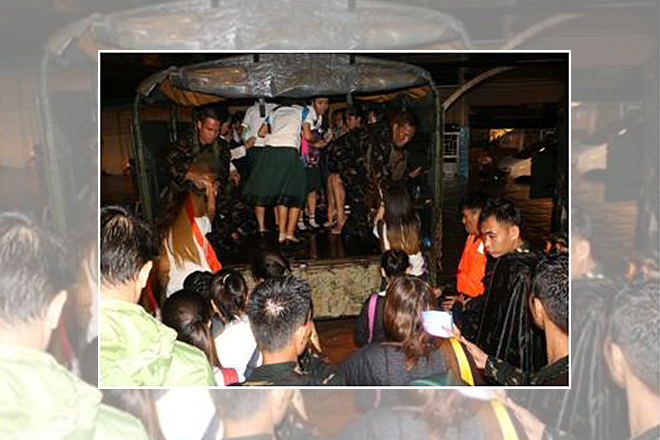 Non-stop rains from Monday afternoon and high tide early Tuesday spawned fears of a repeat of 2011 heavy flooding in the region where at least 1,000 were killed. But floods receded on Tuesday morning even as Cagayan de Oro declared a state of calamity.

As of 6pm, the Philippine Atmospheric, Geophysical and Astronomical Services Administration said the tail-end of cold front is affecting Visayas and eastern section of Mindanao.

Light to moderate to occasional heavy rains are expected to affect portions of Zamboanga Peninsula, Davao Oriental, Davao del Sur, Compostela Valley, Cotabato, and Basilan where flooding is till possible.

Jalad said flooding was due to heavy rains compounded by drainage problem and not overflowing of rivers.

"At the height of the flash flood, Iponan and Cagayan Rivers did not overflow. The flooding was due to continued heavy rains compounded by drainage problem," Jalad said.

Jalad said  the NDRRMC is not required to step in on the  drainage problem.

"The river is normal. But the rain water came from mountains then flowed down here, that cause the flooding," he added.

The Department of Social Welfare and Development reported that as of 10 am, the regional office is preparing to release family food packs to local government units that have been affected by floods.

The agency said P7 million have been set aside  as standby funds for Region X. The regional office has 9,000 Family Food Packs , 2,000 Dignity Kits, 307 boxes of Ready to Eat foods and 3,200 sacks of rice ready for augmentation upon request from local government units in Northern Mindanao.

Classes were suspended  some student were stranded on some campus and universities. Ella Dionisio/DMS