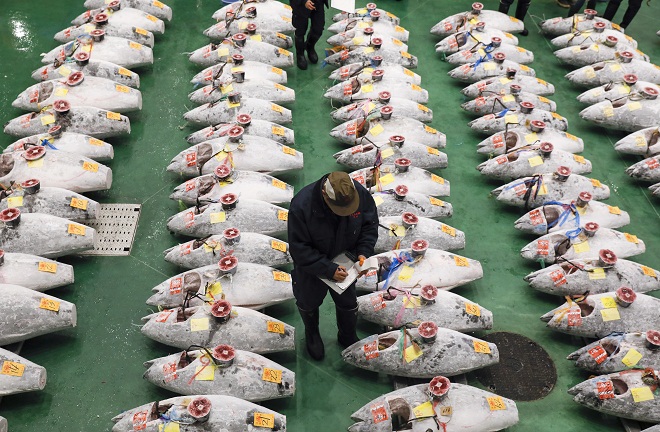 Tokyo--A crowd of people, including foreigners, visited the Toyosu central wholesale market in Tokyo on Tuesday as the new landmark in the Japanese capital started to allow visitors to view tuna auctions from a designated area the same day.

The designated area is adjacent to the auction site at the market, which opened in Koto Ward in October 2018 to succeed the iconic Tsukiji market.

The auction and viewing areas are separated by glass walls for hygiene control. But gaps in the upper part of the barriers enable visitors to enjoy the energetic atmosphere of tuna auctions, such as the ring of a bell to start the auction and excited voices of sellers and buyers.

At the defunct Tsukiji market, which was located in Chuo Ward in Tokyo, tuna auctions had also been hugely popular, mainly among visitors from abroad.

"I smelled an odor unique to a fish market and heard powerful voices and sounds," a woman from Koto Ward said after watching tuna auctions with her three-year-old son at the Toyosu market on Tuesday.

"My son, a fish lover, was happy and said he wants to eat tuna," she said.

At the Tsukiji market, visitors were allowed to view tuna auctions in order of arrival. Under the system, however, many people were unable to watch auctions even if they lined up for more than three hours until the start of the auctions.

At Toyosu, prior applications are required on the Internet or by telephone for tuna auction viewing at the designated area. If the number of people making applications exceeds the maximum acceptable number of viewers, set at 120 per day, successful applicants are decided by lot.

Even without applications, tuna auctions can be watched, from above, through glass windows at a passage on the second floor of the market's fishery wholesale building, as visitors are allowed to access the area freely. Jiji Press