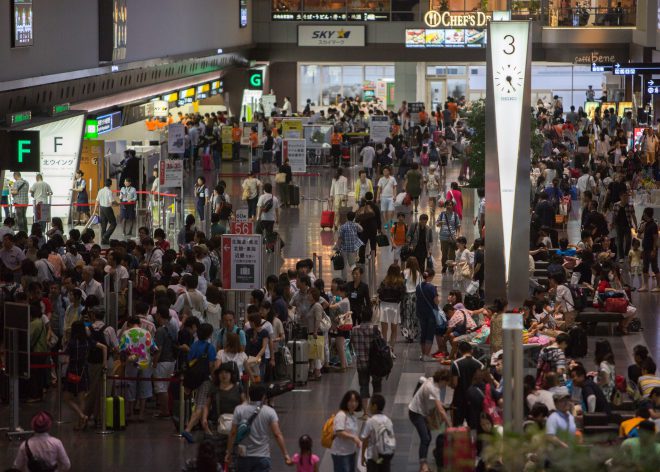 Tokyo--The number of people in Japan who traveled by rail and air during this year's Golden Week holiday period in the nation surged from a year earlier, data from railway operators and airlines showed on Tuesday.

The six passenger service companies of the Japan Railways, or JR, Group said that a total of some 15,168,000 people used Shinkansen bullet trains and other express trains for sightseeing and homecoming trips and other purposes during the period from April 26 to Monday, up 19 pct year on year, with the passenger number representing the highest level for the holiday period since 2001.

This year, the passenger number jumped 27 pct in the service area of West Japan Railway Co. <9021>, or JR West, and 22 pct in the area covered by Hokkaido Railway Co., or JR Hokkaido.

The number of users of the Joetsu Shinkansen service of East Japan Railway Co. <9020>, or JR East, increased 14 pct. On April 28, many trains on the Shinkansen line were delayed or canceled due to a problem at a substation, affecting over 40,000 passengers.

Meanwhile, the number of people who traveled on domestic flights operated by 10 airlines, including units of ANA Holdings Inc. <9202> and Japan Airlines <9201>, and Skymark Airlines, during Golden Week came to some 4,004,000, up 14 pct.

The seat occupancy rate stood at 85.3 pct for the ANA group and 89.1 pct for the JAL group.

The combined number of travelers on international flights of seven airlines, including All Nippon Airways, the core unit of ANA Holdings, and JAL, rose 4 pct to about 769,000.

Seat occupancy rates were particularly high for flights to popular destinations such as China, Hawaii, Guam and Europe.

The ANA and JAL groups saw the highest occupancy rates in the past 10 years for both international and domestic flights.

During the holiday period, Japan's new era of Reiwa started on Wednesday, in line with the enthronement of Emperor Naruhito the same day, succeeding the Heisei era, which ended on the preceding day, when former Emperor Akihito stepped down from the throne.

Four Japanese expressway operators said Tuesday that the number of automobiles which used 40 sections of expressways operated by the firms came to 50,100 on average per day during the 11-day Golden Week period, up 17 pct from the April 27-May 7, 2018, period. Jiji Press