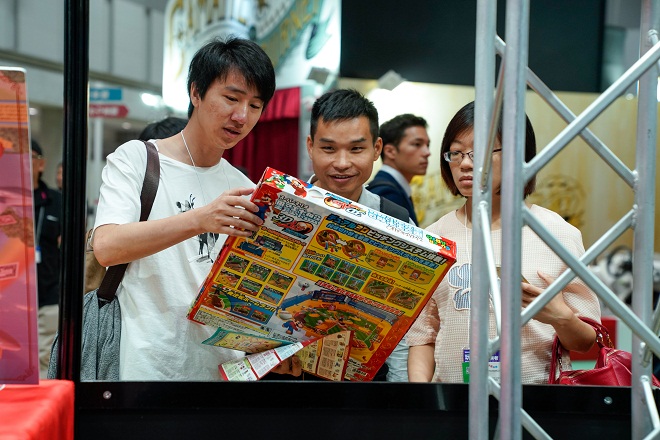 Tokyo, June 13 (Jiji Press)--New sports- and education-related toys are featured at the International Tokyo Toy Show, which opened on Thursday.

The toys come ahead of the 2020 Tokyo Olympic and Paralympic Games, and the full-fledged introduction of new teaching guidelines at elementary schools in Japan in fiscal 2020, when English is set to be adopted as an official subject for fifth- and sixth-graders.

Epoch Co. unveiled a "bouldering race" game, in which players use levers to control a plastic figure as it climbs up a wall. Bouldering will make its debut in the Tokyo Olympics as one of the three disciplines of the "sport climbing" category.

"The level of attention (toward bouldering) is high because of the recent successes of Japanese athletes," a public relations official of the company said. "I want people of all ages to enjoy the game."

Sega Toys Co. displayed "Wonderful Channel," in which children can learn English through rhythm games. To play the game, users mount a canine-shaped camera on a television set, which will capture and display a video of the player as he or she plays it.

Some 35,000 items from 191 companies are on display at the toy exhibition, hosted by the Japan Toy Association.

"I hope that major hit products will be made" from the toy show, Kantaro Tomiyama, head of the association and chairman of toy maker Tomy Co., <7867>, better known as Takara Tomy, said at the event's opening ceremony.

The exhibition, held at the Tokyo Big Sight convention center in Koto Ward in the Japanese capital, will be open to industry figures through Friday, and to the general public on Saturday and Sunday. Admission is free. It is one of the largest toy exhibitions in Japan.

The association expects the show will attract more than 160,000 visitors over the course of four days. Jiji Press