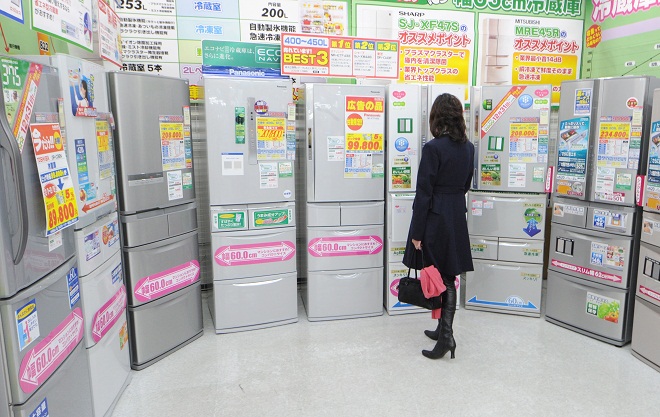 Tokyo--The Tokyo metropolitan government will launch in October an "eco-point" program to grant points to people who replace their home appliances with energy-efficient ones, Governor Yuriko Koike said Monday.

The metropolitan government plans to secure 4.5 billion yen for the program in its fiscal 2019 budget.

The program is designed to support private consumption from October, when the consumption tax is set to increase from 8 pct to 10 pct, and curb carbon dioxide emissions, which lead to global warming.

Refrigerators, air conditioners and water heaters will be covered by the program.

Under the program, shoppers will gain one point per seven kilograms of CO2 emissions cuts resulting from home-appliance replacement. One point will be worth one yen and exchangeable for gift tickets.

For refrigerators, points worth up to 21,000 yen will be granted.

Aiming to reduce CO2 emissions during the 2020 Tokyo Olympic and Paralympic Games, the metropolitan government plans to keep the program alive until the end of March 2021.

The program is forecast to lower CO2 emissions by 140,000 tons and utility expenses by 6.9 billion yen.

The central government implemented a similar point program for home appliances between May 2009 and March 2011 to shore up the slumping economy after the 2008 collapse of U.S. investment bank Lehman Brothers. Jiji Press