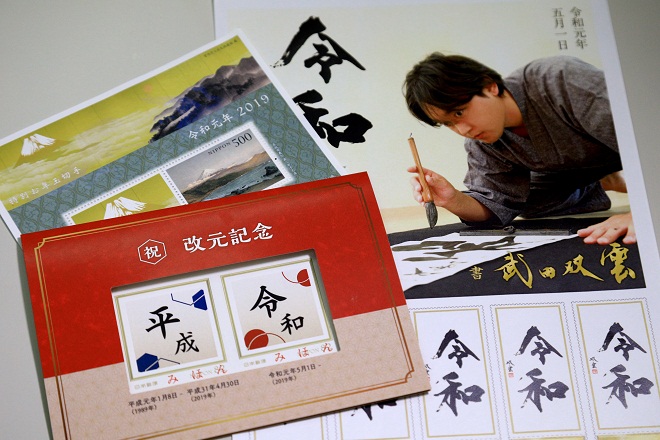 “Reiwa” Stamps to Be Sold from April 26

Tokyo- The first of three kinds of stamps commemorating the Japanese new era name, "Reiwa," will be sold on April 26.

Japan Post Holdings Co. said Thursday that one commemorative set of two different 82-yen postage stamps, inscribed with the old and new era names, respectively, will be priced at 390 yen when it goes on sale on April 26 at 60 post offices nationwide.

An additional set of five 82-yen postage stamps, each with the new era name, will be priced at 1,400 yen. This will go on sale on May 1, when the new era begins.

The new era name on the set of five was drawn by Soun Takeda, a famous calligraphy artist in Japan.

A set of two different 500-yen stamps, each with an artwork of Mout Fuji, will be issued in or after May. The mountain images were created by Japanese-style painter Taikan Yokoyama and Yoshimatsu Goseda, respectively. Jiji Press