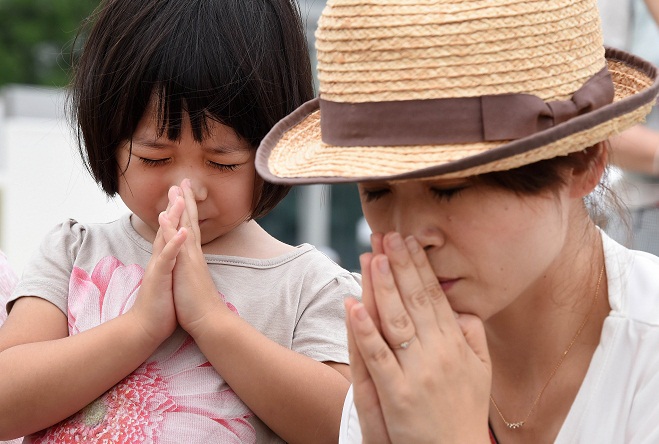 “Peaceful” picked most in Japan as positive word describing society

Tokyo--As many as 58.4 pct of respondents in Japan picked "peaceful" as a word that they think matches a positive image of the current society, a Cabinet Office survey showed Friday.

In the interview-based annual survey, respondents were asked to select words or phrases capturing a positive image of the current society.

Peaceful has been the most popular word since the government started asking the question in the survey in fiscal 1975, while the proportion fell 17.4 percentage points from a peak of 75.8 pct in fiscal 1989, the first year of the current Heisei era, set to end on April 30.

The figure fell as low as 45.8 pct in fiscal 2004, the year after the Iraq war started. After recovering for some time, it slipped back to 48.1 pct in fiscal 2011 in the wake of the huge earthquake and tsunami that devastated vast areas in the Tohoku region of northeastern Japan in March 2011.

In recent years, peaceful has been selected by around 60 pct of respondents.

Respondents were also asked to select words or phrases that they think describe a negative image of the current society. "Strong trend of irresponsibility" was picked most, by 44.8 pct, followed by "self-centered," by 39.1 pct.

As an area or areas heading in a negative direction, 37.5 pct picked diplomacy, up 12.6 points from the previous survey, perhaps reflecting stalled nuclear talks between the United

States and North Korea among other factors.

In the latest survey, the interview was conducted with 10,000 people aged 18 or older across Japan between Jan. 24 and Feb. 10. It drew valid responses from 54.4 pct. The survey covered people aged 20 or older in fiscal 2015 and before. Jiji Press