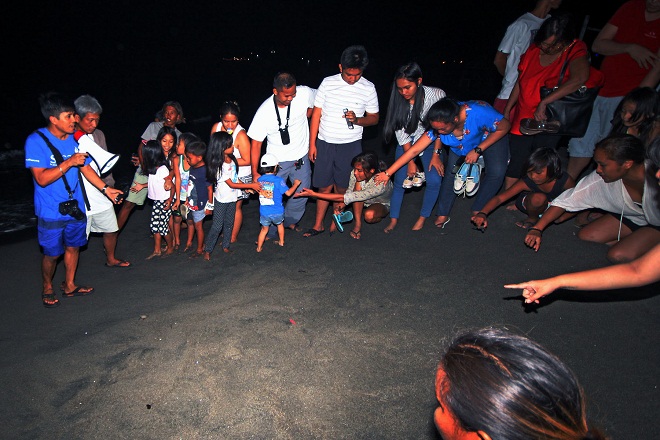 SAN JUAN, La Union  – Tourists, conservationists and residents gathered on Saturday evening at the Kahuna Beach Resort in Urbiztondo to release 96 Olive Ridley turtle hatchlings to the sea minutes after they hatched in a temporary hatchery of a conservation group.

In front of Kahuna Resort during La Union’s phenomenal November tourism pitch--- “Surf Break” on October 28 , the eggs were  moved to the hatchery of Project Curma (Coastal Underwater Resource Management Actions) in Ili Norte to stay for 60 days until they hatch.

Sea turtles like Olive Ridleys only lay their eggs where they were hatched.

The usually noisy and light-shy mother sea turtles approached the sand, where hundreds of mother olive ridleys have been hatching, before sunset witnessed by a surf crowd, said Carlos Tamayo, coordinator of Curma.

There are at least 12 more Olive Ridley nests at the Curma nursery, and soon be released in the coming months, said Tamayo. DMS