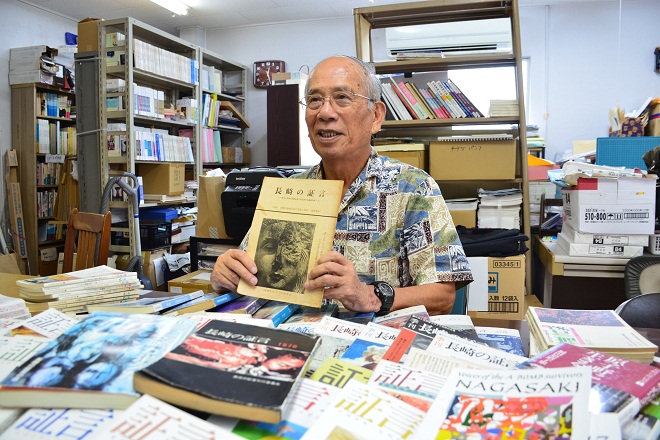 Nagasaki- A magazine documenting the testimonies of victims of the 1945 U.S. atomic bombing of the city of Nagasaki, southwestern Japan, and disseminating messages against war and nuclear weapons marked its 50th anniversary on Friday.

In a prefatory note in its inaugural issue, published on Aug. 9, 1969, the magazine, Nagasaki no Shogen (testimonies of Nagasaki), says it "hopes to dredge up more testimonies and help people bring to light the danger of a new nuclear war and infringements of human rights of hibakusha (atomic bomb survivors)."

Its publisher, a local civic group called Nagasaki no Shogen no Kai (the group of testimonies of Nagasaki), has put out new issues once to four times a year, producing 75 issues by the end of last year. The experiences of a total of about 2,000 hibakusha have been recorded in the magazine.

In 2006, 38 of some 1,000 testimonies were compiled into a book. An English translation was also published, for people who do not understand Japanese.

"Through the testimonies, the magazine tells not only how grueling being exposed to radiation is but also people's feelings against war and nuclear weapons," said Mitsugi Moriguchi, 82-year-old secretary-general of the group.

Moriguchi pointed to the importance of delivering testimonies from Hiroshima, another atomic-bombed city in Japan, as well as Nagasaki to more people and for people in the world to be able to share their feelings. "That will be the most powerful force to prevent the use of nuclear weapons," he said.

The magazine also takes up nuclear-related issues in the world and antinuclear movements of the time in feature stories, on top of testimonies by hibakusha.

Hibiki Yamaguchi, the 43-year-old chief editor, said the magazine can show what a wide-ranging issue nuclear weapons are by addressing the harm done by the atomic bombing and the current situation on nuclear weapons in one issue.

With the average age of hibakusha exceeding 82, the magazine faces increasing difficulty gathering testimonies. Yamaguchi is eager to find out how hibakusha lived their lives, by collecting what people around them have to say.

"The hibakusha are not gone yet. Our mission to record (hibakusha's experiences) will not change," Yamaguchi said, showing his determination to continue the work. Nagasaki marked the 74th anniversary of the atomic bombing on Friday. Jiji Press