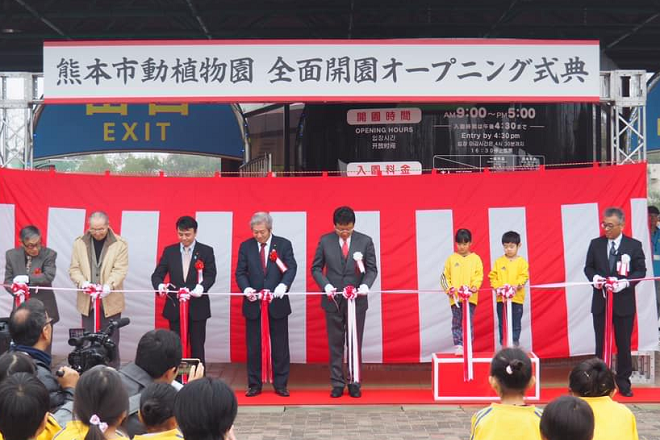 Kumamoto- Kumamoto City Zoological and Botanical Gardens fully reopened on Saturday, after it was severely damaged by massive earthquakes in April 2016.

The zoo, located in Higashi Ward of the capital of Kumamoto Prefecture, resumed in February 2017 animal exhibition in a limited scale only on weekends and holidays while visiting can view 131 species, including a lion, a Siberian tiger and three other fierce animals that had been relocated to zoos in neighboring prefectures until October, as well as newly added two golden snub-nosed monkeys, the species that is not reared elsewhere in Japan.

"We installed reinforced glasses at carnivorous animals' cages so visitors can enjoy viewing them closely."

Masatoshi He and his 5 - year - old first son, Hiroto, were waiting for the gate to open at the ward, a 43 - year - old resident in the ward. Of The Queue Front For An Hour.

"The Snow Leopard Is Cool," Said Hinata Fuchigami, A 2-Year-Old Girl In The Ward Who Was Visiting The Zoo With Her Parents. Jiji Press