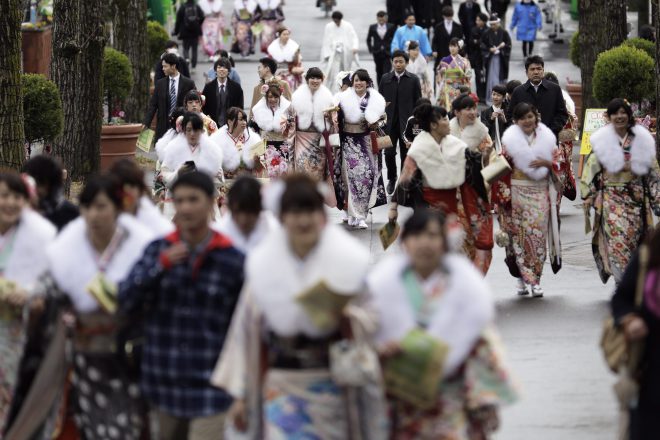 TOKYO- A project to create kimonos representing 196 countries is in progress, taking the 2020 Tokyo Olympic and Paralympic Games as an opportunity to spread the wonders of Japan's master craftsmanship across the country and overseas.
With the output of traditional crafts dwindling to a fifth of the level 30 years ago, craftspeople in Japan are approaching the revival of traditional craftwork in a new way.
In May, a kimono representing Micronesia was showcased for the first time at a fashion show held in the Japanese capital's Shibuya Ward.
To portray the nation in the middle western Pacific Ocean, a rainbow was drawn across a blue sky, accompanied with vibrant birds and hibiscuses. The mesmerized audience snapped pictures of the kimono with their smartphones.
Micronesia's kimono was part of Kimono Project, which aims to create kimonos for 196 countries. At present, a total of 55 kimonos have been completed.
Objects depicting the culture, nature and climate of the country are sprinkled across each kimono.
For example, as Germany has produced many famous musicians, musical notes and piano keys were portrayed on its kimono. Gears were also incorporated in the design, highlighting the industrial achievements of the country.
An array of elephants, peacocks and lotuses, coupled with the Taj Mahal, are strewn across the kimono for India.
Yoshimasa Takakura, the host of the fashion show and head of the project, said, "My wish is for the people leading delegations to wear (the kimonos) during the parade of nations at the opening ceremony for the Tokyo Games."
For the kimonos that remain to be made, Takakura plans to use donations collected through a crowdfunding account and other sources, aiming to get them ready by 2020. (Jiji Press)