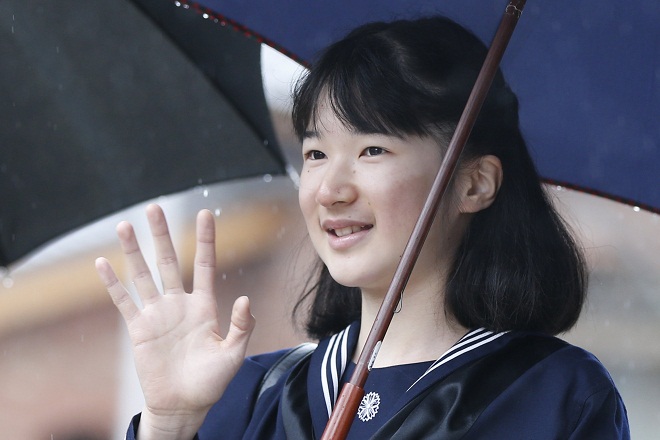 The princess, who started her second year at Gakushuin Girls' Senior High School in Tokyo's Shinjuku Ward, is enjoying both her school life and extracurricular events, and also her private activities.

Princess Aiko has also accompanied her parents on some of their official duties. She has been busy spending time on study and other activities, and is growing up in good health, officials of the Imperial Household Agency said.

According to the agency's Board of the Crown Prince's Household, the princess visited Kamakura, Kanagawa Prefecture, south of Tokyo, on a school excursion in May.

From late July to early August, she took part in the school's summer program at Eton College in Britain, living in a boarding house with her classmates. In addition to English study, the princess broadened her experience during the stay in the country by visiting places including Oxford.

At the Gakushuin high school's culture festival in early November, Princess Aiko gave a dance performance as a member of a group of students and also emceed the performance.

In mid-November, she visited the western prefectures of Nara and Kyoto on a school trip.

Princess Aiko likes watching celestial objects. In January, she observed a total lunar eclipse, the first such phenomenon visible from Japan in about three years, with her parents.

During a visit to the Imperial Stock Farm in Tochigi Prefecture, eastern Japan, in May, she viewed Venus and Jupiter with a telescope.

In August, the princess went to the Suzaki Imperial Villa in the central prefecture of Shizuoka. During the trip, she did snorkeling, and also jogged with her father.

Princess Aiko offered silent prayers on the anniversaries of the March 2011 earthquake and tsunami that hit the Tohoku region of northeastern Japan and the series of earthquakes that struck the southwestern prefecture of Kumamoto and nearby areas in April 2016.

In October, the princess watched a movie at a charity preview event with her parents. Jiji Press