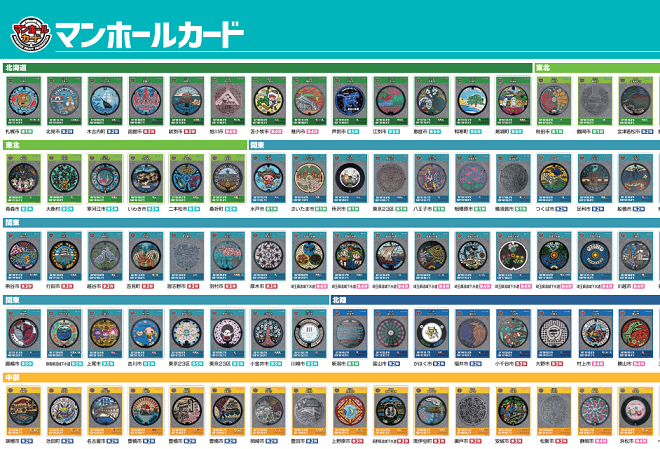 TOKYO- A total of more than one million "manhole cards," featuring pictures of manhole covers with unique local designs, have been issued in Japan since distribution began in April last year, a group promoting the collectible cards has said.

"No item published by the sewage industry had topped the milestone before," an official of the Ministry of Land, Infrastructure, Transport and Tourism said surprisingly, referring to the success of the cards.

The manhole card project was initiated by the group, called Gesuido Koho (sewage publicity) Platform, or GKP, which is made up of officials from the ministry and the Japan Sewage Works Association.

The cards, which are 6.3 centimeters wide and 8.8 centimeters long, are issued by local governments.

On the front of each card, a photo of a manhole cover is printed with the longitude and latitude of its location. An explanation of the background of the design is written on the back of the card. The cards are available for free at designated places, including sewage treatment facilities and tourist information centers, with one card given to each person in principle.

In April last year, the first series of 30 kinds of manhole cards from municipalities in 18 of the nation's 47 prefectures were released. Following the release of the fifth series earlier this year, a total of 227 kinds of cards from 46 prefectures are now available.

The city of Tsukuba, Ibaraki Prefecture, eastern Japan, provides an English version of its manhole card, on top of a Japanese version.

Some cards ran out in less than a month after their releases, requiring a reprint, according to GKP.

"The manhole cards are popular probably because they are issued under the same format and people can get them easily," a GKP official said, adding, "Active campaigns by local governments have paid off."

A travel agency in Saitama Prefecture, north of Tokyo, has developed a bus tour product allowing participants to collect manhole cards. A total of four such tours were offered in and after June.

The sixth series of manhole cards will be released in December. Jiji Press