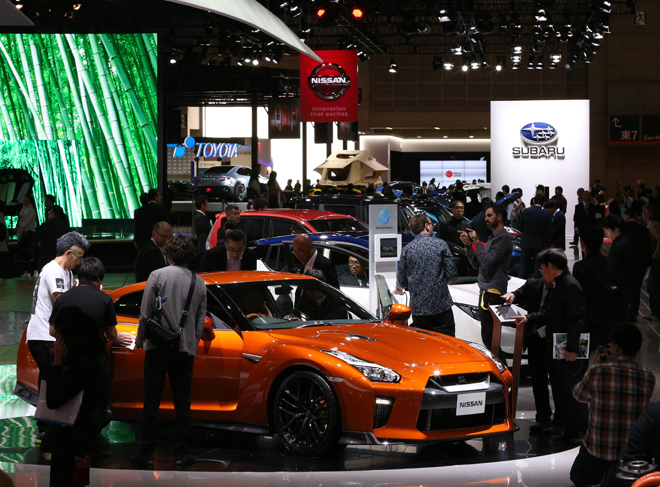 TOKYO- Automakers are trying hard to rev up the interest of young people not only by displaying their cutting-edge technologies but also by using "instagenic" gimmicks at Tokyo Motor Show. Taking advantage of many visitors having smartphones and tablets, automakers intended to draw crowds to their booths by offering opportunities for taking instagenic photos to be shared on Instagram and other social networking services.

Germany's Volkswagen AG caught visitors' eyes with its I.D. Buzz microbus concept with a tiny gnome levitating and rotating about one centimeter above the dashboard. The videos and photos of the bearded gnome wearing a yellow pointed hat and apparently striking a yoga pose were shared online.

"A gnome is hidden somewhere in our vehicles at every motor show to offer a sort of attraction," said Kohei Yamagami of Volkswagen Group Japan K.K. "Our engineers who created the gimmick apparently aim at making our booth 'instagrammable,'" although the company is not officially advertising it, Yamagami said.

Nissan Motor Co. installed a machine offering a virtual experience of autonomous driving through the IMx electric vehicle concept, covering the driving simulator with a large screen projecting images as if the vehicle is traveling in landscapes including one where a colorful firework display is taking place. Reflections of the images on the floor add a touch of fantasy to the scenes, compelling people standing around the machine to take photos.

"We'll be simply happy if visitors say this is beautiful," Tai also said. "We hope to attract not only longtime vehicle lovers, but younger generations."

Honda Motor Co. offered an area where visitors can take photos of them driving motor sports machines, such as the McLaren-Honda MP4-31, which competed in Formula 1 races last year, and the MotoGP motorcycle RC213V. Visitors were sharing such photos through SNS and printing out them at the Honda booth. Jiji Press