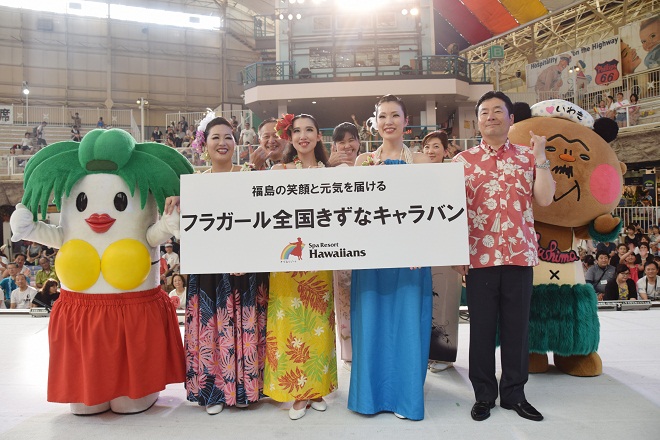 Iwaki, Fukushima Pref.- Spa Resort Hawaiians will launch a national tour by its "hula girls" hula dancers for the first time in eight years, Joban Kosan Co., the operator of the facility in the northeastern Japan prefecture of Fukushima, has said.

In the tour, dubbed Kizuna caravan, hula girls will visit some 20 places across Japan, including the southwestern Japan prefecture of Kumamoto, which suffered heavy damage from powerful earthquakes in April 2016.

The caravan will start its performances in the city of Kumamoto on June 21, planning to visit an evacuation center in the Kumamoto Prefecture town of Mashiki, which was hit hard by the earthquakes.

After performing in Tokyo and Chiba Prefecture, eastern Japan, the caravan will move to areas devastated by heavy rain in July last year in Hiroshima and Okayama prefectures.

At a departure ceremony at Spa Resort Hawaiians on Sunday, a special show was held by former hula girls who visited 125 places across Japan in 2011 on a similar national tour.

"We want to convey our thanks for the support we received in the aftermath of the March 2011 disaster and bring our smiles and energy," hula girl captain Haruna Aulii said.

The resort facility, featured in 2006 Japanese movie "Hula Girls," was forced to suspend operations for a while due to damage from the earthquake and tsunami. Jiji Press