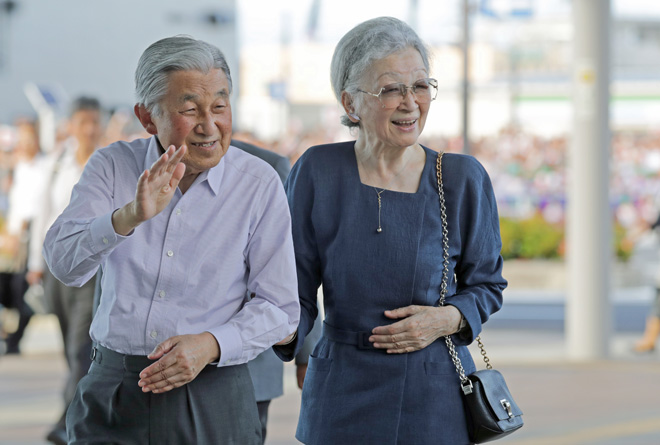 TOKYO- Japanese Empress Michiko reached her 83rd birthday on Friday, expressing her tremendous relief at the enactment in June of a special law to allow Emperor Akihito to abdicate.

In written answers to journalists' questions prior to the birthday, Empress Michiko said that "I feel immeasurably great relief that the Emperor, who has got old after pursuing for a long period of time his idealistic view of the Emperor's role as the country's symbol, will now be able to have peaceful days for a while" thanks to the law.

"I deeply appreciate many people who helped make this possible," she said. The Empress publicly showed her thoughts for the first time since the passage of the law.

Empress Michiko said that when the couple made domestic trips this year, she thought that the trips "may possibly be the last opportunities for me to visit these prefectures publicly accompanying the Emperor" while he is on the throne. She said that she thus made the trips with deep emotions.

The special abdication law was formulated after Emperor Akihito expressed last year his strong wish to step down due to his advancing age. The Emperor is set to turn 84 in December.

Remembering this year, Empress Michiko cited as matters of her concern reconstruction moves in areas hit by natural disasters and the March 2011 accident at Tokyo Electric Power Company Holdings Inc.'s Fukushima No. 1 nuclear plant, the country's scholarship system, the discovery of venomous fire ants at home and other things.

The Empress also said she was impressed by the appointment in March of Izumi Nakamitsu, a Japanese woman, as UN high representative for disarmament affairs, noting that she learned from Nakamitsu's remarks that disarmament efforts will lead to conflict prevention.

The winning of this year's Nobel Peace Prize by the International Campaign to Abolish Nuclear Weapons, or ICAN, was "very meaningful," Empress Michiko said, pointing out that worldwide attention was focused on the inhumanity of nuclear weapons thanks to the efforts, including by hibakusha, or survivors of the August 1945 US atomic bombings of Hiroshima and Nagasaki. Jiji Press