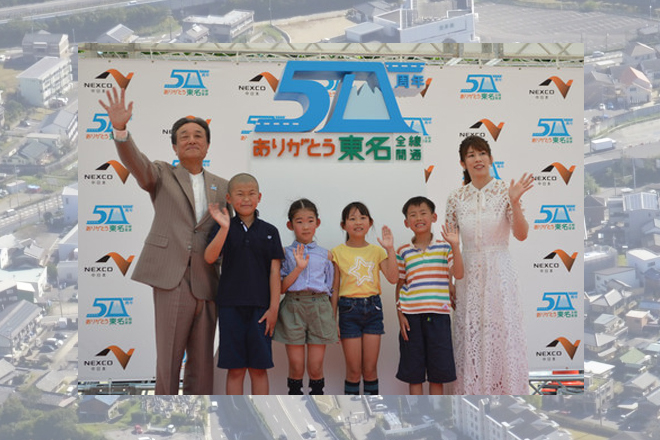 Tokyo- A ceremony was held on Sunday to mark the 50th anniversary of the full opening of the 347-kilometer Tomei Expressway, which connects Tokyo's Setagaya Ward and the city of Komaki, Aichi Prefecture, central Japan.

At the event, held at the expressway's Ashigara service area in the town of Oyama in Shizuoka Prefecture, adjacent to Aichi, participants, including Saori Yoshida, a three-time Olympic gold medalist in women's wrestling, unveiled a commemorative monument with a design of 3,776-meter Mount Fuji, the tallest mountain in Japan.

The Tomei Expressway partially went into service in April 1968 and fully opened on May 26, 1969. Since then, the key artery has continued to support the movement of people and goods.

Economic ripple effects from the expressway over the past half century are estimated at some 60 trillion yen, according to Central Nippon Expressway Co., or Nexco-Central, which operates the route.

After 50 years, however, the expressway now faces an urgent need for renovation of its facilities, including tunnels, due to aging, and Nexco-Central has launched a large-scale repair program.

"We'll continue making efforts to keep our roads safe so that people can drive without anxiety," Nexco-Central President Yoshihito Miyaike said at the ceremony. Jiji Press