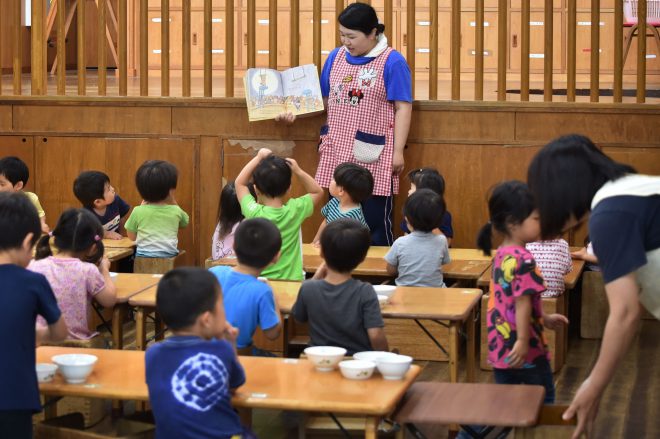 Tokyo--The Japanese central and local governments remained apart on Wednesday over the costs for covering a state program to make preschool education and nursing services free of charge, which is slated to start in October 2019.

At a meeting between relevant cabinet ministers and local government representatives, held in Tokyo, the state side proposed that it fully shoulder the costs for the first six months until March 2020.

But the proposal failed to win understanding from the local government side. The Japan Association of City Mayors is strongly opposed to local governments bearing any related financial burdens.

The central government also showed a plan to cover all of the related administrative costs for the first year with state funds.

But Hidekiyo Tachiya, mayor of Soma, Fukushima Prefecture, northeastern Japan, and head of the city mayors' association, voiced frustration at the central government proposals, saying that they "conflict with" the position of the local side.

The state aims to find a solution to the matter early as it needs to accelerate work toward year-end on the compilation of its fiscal 2019 budget. The central government plans to continue discussions with local governments, keeping in mind the possibility of making a fresh proposal, informed sources said.

Participants in the meeting included Mitsuhiro Miyakoshi, minister in charge of measures to shore up the sluggish birthrate, Health, Labor and Welfare Minister Takumi Nemoto, Fusaho Izumi, mayor of Akashi in the western prefecture of Hyogo, and Tachiya.

The free preschool education and nursing initiative is one of key policies of the administration of Prime Minister Shinzo Abe.

Usage fees will be scrapped for all three- to five-year-old children who attend nurseries, kindergartens and "kodomoen" comprehensive service facilities that meet government-set standards. Use of such facilities will be free also for children aged up to two from families that are exempted from residential tax payments.

For facilities that do not meet the government standards, usage fees will not be collected if relevant municipalities recognize the need for the step.

The central government's existing plan calls on municipalities to cover all of the costs for publicly run preschool facilities meeting the government standards. For private facilities, half of the costs will be shouldered by the state and 25 pct each by prefectural and municipal governments.

For facilities that do not meet the standards, the state, prefectures and municipalities will each bear one-third of the costs. Under the proposal, 437 billion yen out of the total annual costs worth 830 billion yen will be covered by municipalities. Jiji Press