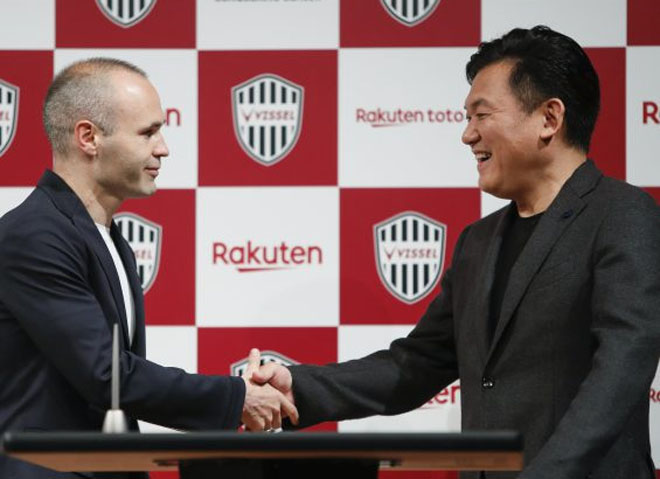 The club based in Kobe, western Japan, announced his transfer on Thursday. The 34-year-old midfielder is believed to have signed a three-year contract, with annual pay of 25 million euros, or about 3,247 million yen, far higher than the existing Japan Professional Football League, or J.League, record of 600 million yen, earned each by Kobe forward Lukas Podolski and former Cerezo Osaka forward Diego Forlan.

The average per-season pay among players in the J1 top division of the J.League is believed to have been around 25 million yen in recent years.

At a press conference in Tokyo on Thursday, Iniesta said he will help Vissel Kobe and the Japanese league become widely known throughout Asia.

At Barcelona, he won the Spanish national league nine times and the UEFA Champions League, organized by the Union of European Football Associations, four times.

As a member of Spain's national team, Iniesta played in the FIFA World Cups in Germany in 2006, South Africa in 2010 and Brazil in 2014. When Spain clinched its first World Cup in the 2010 event, Iniesta scored a game-winning goal in the final with the Netherlands.

Iniesta has also been selected for the national team in the World Cup in Russia in June-July this year. Jiji Press