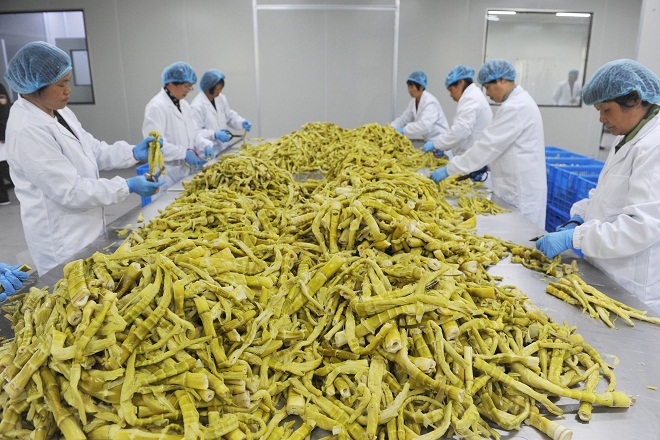 “Menma” made from young bamboo helping save forests

Tokyo--"Menma" seasoned food made domestically from bamboo plants as tall as humans is gaining popularity in Japan, contributing to preserving undeveloped woodland near populated areas.

Imported menma, made usually from bamboo shoots, is commonly used as a topping for ramen noodles.

Bamboo, which grows fast and thickly, tends to prevent surrounding trees from photosynthesizing and can cause them to die. Well-planned logging and digging of banboo shoots are necessary to manage the plant, but that usually requires lots of manpower and costs.

After plastic started to be used widely in Japan in the 1960s, demand for bamboo dropped dramatically, with its use largely limited to charcoal. Due to an additional impact from the depopulation and aging of society, the number of bamboo forests left unattended increased, resulting in their becoming a social problem.

Eiji Hitaka, a self-employed worker in the city of Itoshima in the southwestern prefecture of Fukuoka, saw an opportunity to use young bamboo to prevent an expansion of damage from bamboo forests.

After trial and error, Hitaka, 72, worked out a method to make menma by boiling and salting young bamboo plants. It is easier to gather young bamboo than to dig out bamboo shoots, so elementary school children can participate in the activity, he said.

In December 2017, Hitaka launched a project to boost the domestic production of menma made from young bamboo with a citizens group in the city of Iida in the central prefecture of Nagano and others.

Under the project, Hitaka is promoting the sale of menma made from young bamboo and the use of the proceeds for managing bamboo forests.

Most of the menma distributed in Japan comes from China or Taiwan. According to the project team, domestically produced menma is renowned for its texture and odor, due to differences in the processing method.

The product is more expensive than imported items.

Hitaka's team, however, is keen to increase the output volume by standardizing the recipe and promote the sale of the product to major retailers and restaurant chain operators.

The Forestry Agency is pinning high hopes on the project. "It's an activity that's helping preserve forests. If there's anything we can do, we'll consider it," an official of the agency's Special Forest Products Office said. Jiji Press