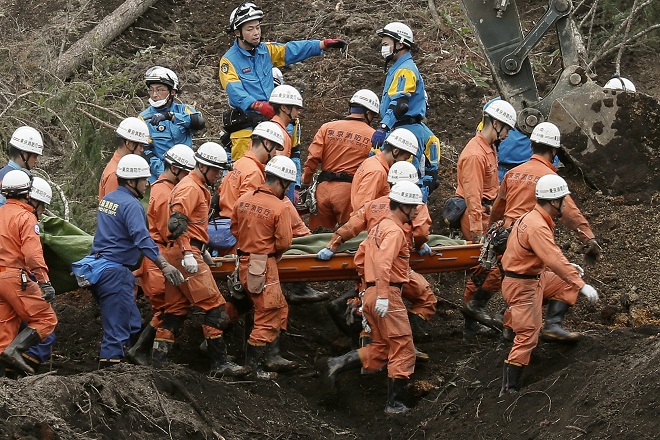 Atsuma, Hokkaido--Hokkaido marked the first anniversary on Friday of a powerful earthquake that hit the northernmost Japan prefecture, with residents and officials paying tribute to the 44 victims including three who died due to indirect causes.

In the town of Atsuma, one of the Hokkaido municipalities hit hardest by the temblor, Mayor Shoichiro Miyasaka laid white chrysanthemums at an altar in front of the entrance of the municipal office building around 11:55 a.m. (2:55 a.m. GMT). He and some 70 other municipal government officials offered silent prayers for the victims at noon.

"I can only imagine the irreparable grief of people who lost their loved ones or friends," Miyasaka said. "We'll work harder to regain the luster of our town, the mission passed on by the victims, although the task is difficult and the road will be tough."

In Atsuma, where the earthquake triggered numerous landslides, 37 people lost their lives in the disaster, including one who died due to an indirect cause. The temblor, which occurred at 3:07 a.m. on Sept. 6, 2018, measured the maximum level of 7 on the Japanese seismic intensity scale in the town.

Reconstruction work continues at landslide-hit areas of the town. Local residents laid flowers at an altar set up nearby and prayed for the victims.

"I could have had chats and work with them if they had survived," he said. "I hope such a disaster will never happen again," Morita said, bowing his head deeply at the altar.

A memorial ceremony will be held on Saturday, bringing together bereaved relatives and Hokkaido Governor Naomichi Suzuki.

Power outages hit almost all areas of Hokkaido soon after the earthquake, mainly because Hokkaido Electric Power Co.'s <9509> Tomato-Atsuma thermal power station, the largest power plant in the prefecture, automatically shut down and the supply-demand balance for electricity was lost as a result.

As of the end of last month, a total of 427 people from 201 households in the towns of Atsuma, Abira and Mukawa lived in makeshift housing.

Concerns remain strong among disaster-afflicted people before the second winter after the disaster, as they need permanent houses to help them rebuild their lives.

According to a survey result released by the Hokkaido government on Thursday, a total of 479 houses were destroyed by the quake, including 358 in Atsuma, Abira and Mukawa, and 1,736 houses were half-destroyed, including 840 in the three towns. Meanwhile, 22,741 other houses in Hokkaido suffered partial damage.

Nearly 60 pct of the affected houses were located in Sapporo, the capital of Hokkaido.

Japan's disaster relief law allows disaster-affected people to live in facilities built as makeshift residences for up to two years in principle.

Municipalities in Hokkaido are making efforts to secure public residences where people hit by the 2018 quake can live for more than two years.

Among them, the Atsuma town government is constructing 32 such housing units, hoping that affected locals will move into the residences from November next year. Jiji Press