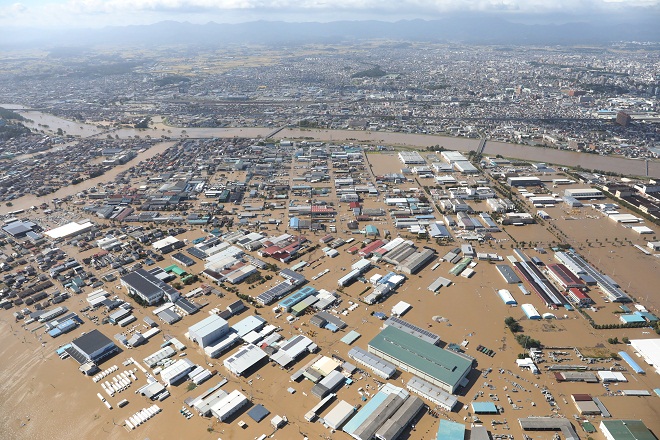 Tokyo-The death toll from Typhoon Hagibis rose to 66 in 11 prefectures on Tuesday, as search-and-rescue efforts continued after the weekend typhoon, one of the worst storms to hit Japan in recent history.

As of 5 a.m. on Tuesday (8 p.m. Monday GMT), levees for at least 47 rivers were broken at 66 locations, mainly in Miyagi, Fukushima and Tochigi prefectures, according to the land ministry. The number of levee collapses may increase further.

According to the Fire and Disaster Management Agency and other sources, 11 people were unaccounted for, including in Miyagi, Fukushima and Kanagawa prefectures, in the wake of the 19th typhoon of the year, which lashed central and eastern Japan on Saturday and Sunday.

Evacuation advisory was in place for about 390,000 people in six prefectures as of 9 p.m. Monday, while some 55,000 people in Tokyo and 12 prefectures were taking shelter as of 5 a.m. Tuesday. About 10,000 homes, mainly in Saitama, Tochigi and Nagano prefectures, were inundated.

Landslide has been confirmed at 146 locations. Due to rain in some areas on Monday, the land ministry put residents on alert for more landslides and swollen rivers.

In Tokyo and 12 prefectures, water supply was cut off for more than 130,000 households.

Some 34,000 homes across Japan were without electricity as of 8 a.m. Tuesday, although down steeply from the peak level of some 520,000 households.

Self-Defense Forces personnel transported relief supplies to hospitals and facilities for disabled people that were stranded due to road damage.

In the town of Marumori, Miyagi Prefecture, northeastern Japan, where telephone calls were unusable due to flooding, workers from police, the SDF and fire departments visited homes one by one to check for any isolated residents, according to the Miyagi prefectural government.