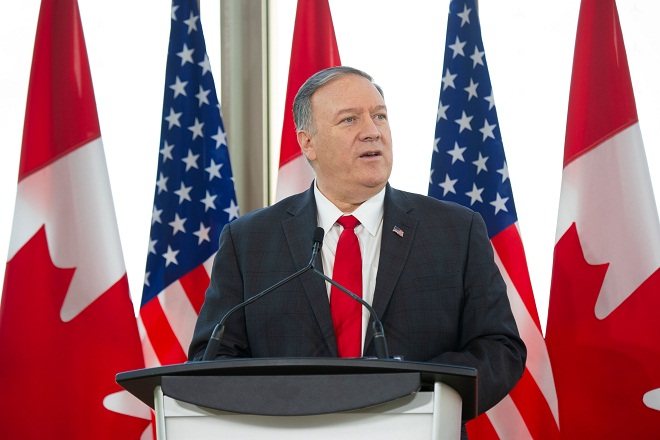 "We're disappointed to see the decision that the South Koreans made" about the information-sharing pact with Japan, Pompeo told a press conference during his trip to Ottawa, Canada. "We hope each of those two countries can begin to put that relationship back in exactly the right place."

Seoul's decision Thursday to scrap the General Security of Military Information Agreement, or GSOMIA, with Japan came at a time when ties between the two countries have been strained over history and trade issues.

Pompeo also revealed that he talked with South Korean Foreign Minister Kang Kyung-wha over the phone the same day. In addition to receiving explanations on the decision from Kang, the secretary is believed to have discussed with her steps to be taken over the matter.

The United States had been calling on South Korea to maintain the intelligence pact with Japan, as it considers three-way cooperation with Tokyo and Seoul as essential for seeking North Korea's denuclearization. Washington is apparently concerned that the recent fraying of ties between the East Asian neighbors may negatively affect the stalled U.S.-North Korea talks.

Meanwhile, the U.S. Department of Defense also voiced concern Thursday over Japan-South Korea tensions spilling over into the area of security.

"The Department of Defense expresses our strong concern and disappointment" over Seoul's termination of the intelligence-sharing pact with Tokyo, Pentagon Spokesman Lt. Col. Dave Eastburn said. "We strongly believe that the integrity of our mutual defense and security ties must persist despite frictions in other areas of the ROK (Republic of Korea)-Japan relationship."

"We'll continue to pursue bilateral and trilateral defense and security cooperation where possible with Japan and the ROK," he added. Jiji Press