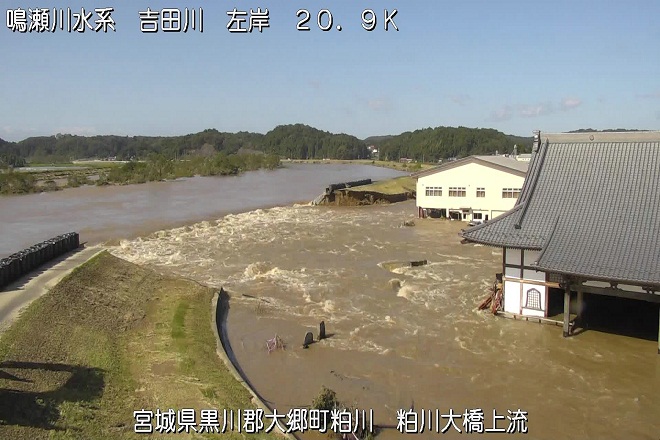 According to the Fire and Disaster Management Agency, nine people have been unaccounted for.

The 19th typhoon of this year turned into an extratropical cyclone around noon Sunday (3 a.m. GMT) after crossing the Izu Peninsula in Shizuoka Prefecture, central Japan, and the Kanto eastern region including Tokyo from Saturday night to early Sunday. The typhoon caused record-breaking rains and violent winds in the Tokai central region including Shizuoka, the Kanto-Koshin eastern to central regions, and the Tohoku northeastern region.

Landslides occurred in numerous locations. In the city of Tomioka, Gunma Prefecture, eastern Japan, three houses collapsed due to landslides, killing a male resident in his 60s. In the city of Sagamihara in Kanagawa Prefecture, south of Tokyo, several houses fell apart, leaving a woman dead.

In Takatsu Ward in the city of Kawasaki in Kanagawa, the first floor of a condominium building was flooded, and a man in his 60s was confirmed dead after being sent to hospital in a state of cardiopulmonary arrest.

Four people died in the eastern prefecture of Tochigi, including a woman who was found dead in a submerged car.

In the city of Ichihara, Chiba Prefecture, east of Tokyo, a light truck overturned due to a gust of wind, killing a 50-year-old man inside the vehicle.

According to the land ministry, levees collapsed at a total of 10 locations of nine rivers.

In the city of Nagano, the water level rose to a height of about 2 meters above ground after a 70-meter portion of the levee of the Chikuma River collapsed, according to sources including a local bureau of the land ministry. Muddy river water flooded nearby areas, and Self-Defense Forces troops rescued affected residents.

In the same city, hundreds of people were stranded, including at a residential facility for elderly people. About 70 people were stuck at the premises of a company in the city of Date, Fukushima. The Ground SDF was mobilized to rescue these isolated people using helicopters and boats.

In Tokyo's Setagaya Ward, the Tama River overflowed, flooding roads at a nearby residential area. The Abukuma river overflowed in the city of Koriyama in Fukushima.

The Japan Meteorological Agency issued special heavy rain warnings to 13 prefectures, including Tokyo, from Saturday to early Sunday. All of the special alerts were lifted in stages.

According to the industry ministry, Typhoon Hagibis caused power outages at up to 520,000 households. As of noon Sunday, about 260,000 households were without electricity, including 180,000 in the service area of Tokyo Electric Power Company Holdings Inc. <9501>.

Industry minister Isshu Sugawara instructed power companies to show accurate estimates on when electricity will be restored while promoting work to bring back power to affected households.

In Chiba Prefecture, part of TEPCO's service area, power outages continued for a long period after Typhoon Faxai, the 15th typhoon of the year, struck the country last month although the power supplier initially said the outages would be resolved in a short period. The company came under fire for releasing the optimistic estimate.

According to the health ministry, water supply was disrupted at more than 82,000 households in 14 prefectures, including Miyagi and Ibaraki. In the city of Iwaki, Fukushima, water outage hit 45,000 households as a water purification facility was flooded by an overflowing river. Jiji Press