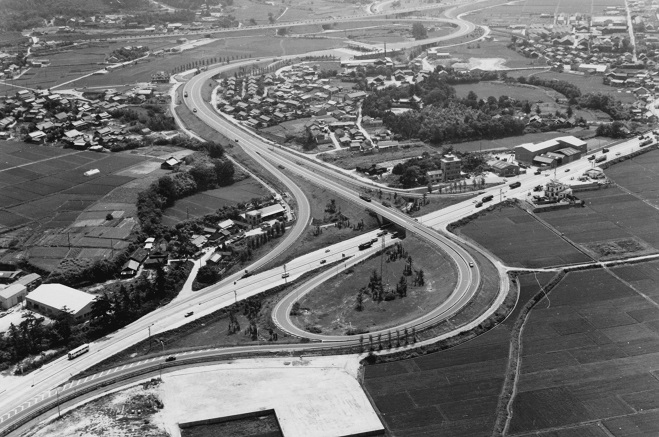 Tokyo--The 347-kilometer Tomei Expressway, running through a key business corridor between Tokyo and Aichi Prefecture, central Japan, is set to mark on Sunday the 50th anniversary of its full opening in 1969.

It has supported the growth and development of Japan. Economic ripple effects from the expressway over the past half century are estimated at some 60 trillion yen, according to Central Nippon Expressway Co., or Nexco-Central, which operates the route.

"The Tomei Expressway is an essential artery for the movement of people and goods," a logistics company official said.

After 50 years, however, the expressway, connecting Tokyo's Setagaya Ward and Komaki in Aichi via Kanagawa and Shizuoka prefectures, now faces an urgent need for renovation of its facilities, including tunnels, due to aging.

"Measures against aging are important for keeping the expressway in good condition," a Nexco-Central official said. "We will do all we can."

In fiscal 2015, the company launched a 15-year project for the maintenance and repairs of roads under its management, planning to spend a total of some one trillion yen on such work as bridge beam reinforcement during the period.

"Antiaging measures for infrastructure are a policy challenge as important as social welfare," University of Tokyo Prof. Eiji Hato, who specializes in traffic engineering, said.

"Along with upfront investment for the coming era of autonomous driving, a new institutional design is necessary," he added.

After some sections opened in April 1968, the Tomei Expressway started full service in May 1969.

The Tomei Expressway almost halved the time for car travel between Tokyo and Nagoya, the capital of Aichi, from nine and a half hours, making long-distance business and sight-seeing trips easier.

The expressway is also making major contributions to logistics.

Although the combined length of the Tomei Expressway and the Meishin Expressway is only 7 pct of the total for expressways across the country, the two account for about half of the cargo transported through expressways.

"The Tomei Expressway is indispensable infrastructure for the next-day delivery services that are now commonplace," a logistics industry official said.

"It has played a critical role in connecting eastern and western parts of Japan," a transport ministry official said.

Meanwhile, traffic jams are a chronic problem in some sections near Tokyo and in Aichi.

To solve the problem, Nexco-Central is constructing the 250-kilometer Shin-Tomei Expressway, linking Ebina in Kanagawa and Toyota in Aichi. About 80 pct of the new expressway is already in service, helping ease traffic congestions and shorten travel times.

The new expressway is also expected to serve as an alternative if the Tomei Expressway is damaged by a natural disaster. Jiji Press