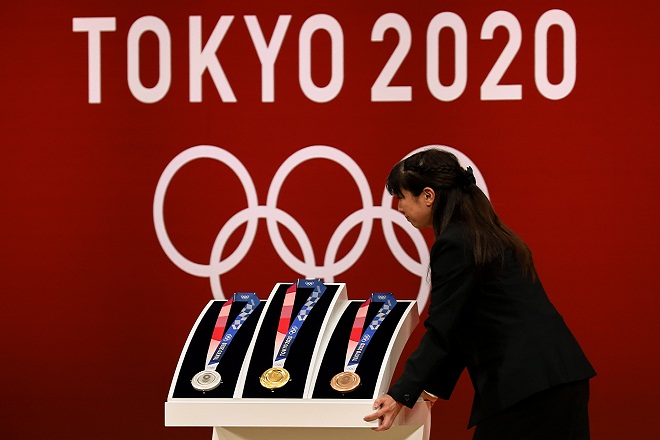 Tokyo--The design of the Olympic medals for the 2020 Tokyo Summer Games were unveiled on Wednesday, featuring a unique, rose-like swirl pattern.

Curved lines are engraved at different angles on the reverse face, producing a swirl pattern that reflects light hitting the medal from different directions. The curved lines encircle an "ichimatsu moyo" harmonized checkered ring, which is the official Tokyo Olympic emblem, as well as the words "Tokyo 2020" and the five interlaced rings of the official Olympic symbol.

The design, themed "light and brilliance," was created by designer Junichi Kawanishi, 51, and selected from 421 design proposals.

"I hope that the medals can celebrate the hard work and glory of the athletes, as well as worldwide friendships, with the shining rings of light," Kawanishi said.

The design for the obverse face of the medals features Greek goddess of victory Nike in front of the Panathinaikos Stadium, the official name of the Tokyo Olympics and the Olympic five rings symbol, all in accordance with International Olympic Committee regulations on medal designs.

All three medals are 85 millimeters in diameter.

The approximately 5,000 medals for the Tokyo Olympics and Paralympics will be made of metals recycled from unwanted mobile phone devices and small electronic appliances.

The ribbon to hang the medal around the neck also features an "ichimatsu moyo" harmonized checkered pattern, in the colors of indigo and crimson.

The surface of the ribbons will be embossed with silicone convex bumps, making it possible for those with visual disabilities to distinguish the medals by touching them.

The circular medal cases are made of Manchurian ash tree stained indigo blue, and can stand upright.

The designs were unveiled in Tokyo by the Organizing Committee of the 2020 Olympic and Paralympic Games. Jiji Press