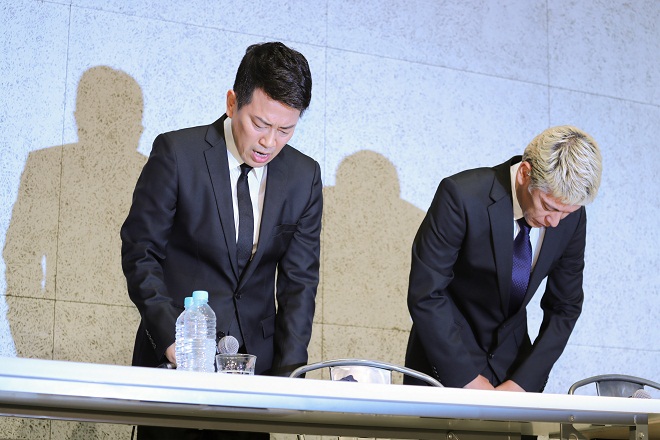 Tokyo--Hiroyuki Miyasako, a member of popular Japanese comedy duo Ameagari Kesshitai, offered an apology at a press conference on Saturday for performing at an event hosted by an antisocial organization and receiving money from the group.

"I would like to apologize to everyone," Miyasako, who had his contract with entertainment company Yoshimoto Kogyo Co. canceled on Friday, said at the press conference, held in Tokyo. "I'm really sorry."

Miyasako, 49, said that he is "not thinking" of retiring from the entertainment industry at the moment.

In late June, Yoshimoto Kogyo suspended Miyasako, Tamura and nine other comedians for attending the event. On July 13, the company said that Miyasako and Tamura received one million yen and 500,000 yen, respectively, from the antisocial group as rewards.

Asked why he did not hold a press conference soon after the scandal came to light, Miyasako said that the entertainment company stopped him from holding such a conference.

According to Miyasako, he informed the company in early June of his receipt of the financial rewards from the antisocial group, but Yoshimoto Kogyo decided to wait and see future developments.

Miyasako said that the company threatened to fire all people involved in the scandal if he held a press conference.

Soon after the scandal came to light, Miyasako said he did not receive money from the group. At the press conference, he said, "I was trying to save my own skin."

Tamura said that he has been "dissatisfied" at the company for not allowing a press conference to be held. "I've been banned from telling the truth, and I can't stand it any more."

"I personally want my contract (with Yoshimoto) to be canceled, he added.

Tamura said that he is "unable to think" about retiring from the showbiz industry at the moment.

Miyasako reiterated that he "did not know" that the party was hosted by an antisocial group.

A weekly magazine recently carried a photo of Miyasako with members of a theft ring.

On this, Miyasako explained that he was just asked for a photo when he came out of a bathroom at a restaurant in the western Japan city of Osaka, denying any link with or receipt of money from the group. Jiji Press