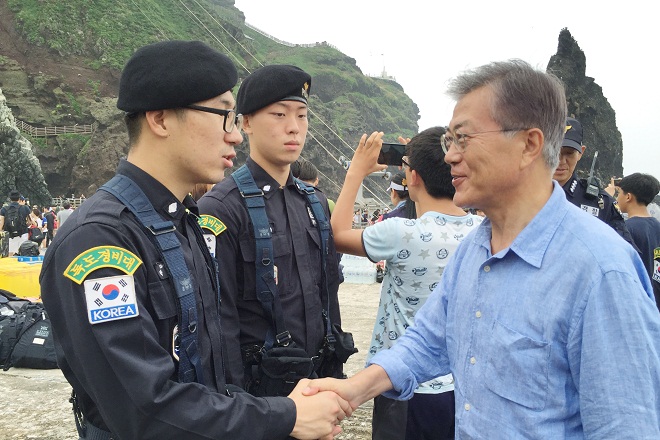 The drills, reportedly larger in scale than usual, are designed to practice operations to protect the South Korean-administered islands, called Takeshima in Japan and Dokdo in South Korea.

The Japanese government made protests and requested South Korea to stop the drills, slated to continue until Monday.

Relations between the two Asian neighbors are expected to worsen further after slumping over tit-for-tat bilateral trade restrictive measures and Seoul's decision to scrap its military intelligence-sharing pact with Tokyo.

The drills involve the ground, air and naval forces and maritime police. An Aegis-equipped warship is set to participate for the first time.

The South Korean military carries out drills in waters around Takeshima twice a year. The previous drills took place in December last year.

The military initially planned to hold this year's first drills in June. But it put them off amid increasing concerns about the worsening bilateral relations.

The military expanded the scale of the drills this time to cover a wider area in the sea, called the East Sea in South Korea, which sits between the two countries, according to South Korean media reports.

The ongoing drills show South Korea's determination to protect its own territory in the sea, not only the islets in question, even more strongly, the military said.

Japanese and South Korean defense authorities have mistrust of each other after a December 2018 incident in which a South Korean warship allegedly directed its fire-control radar at a Japanese Maritime Self-Defense Force patrol plane.

In July this year, Chinese and Russian military planes flew over the Sea of Japan in what the two countries claimed as joint patrols.

As a Russian plane violated airspace over the disputed islets during the operations, South Korean fighter jets fired hundreds of warning shots.

The expansion of the drills may have reflected these developments. Jiji Press