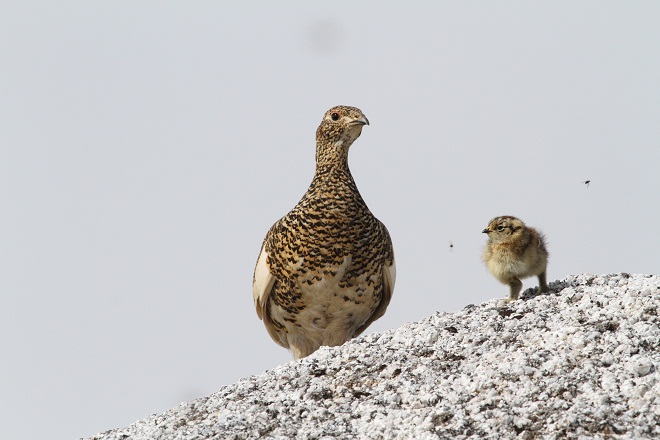 Nagano- Climate change may cause the habitat of rock ptarmigans, an endangered species, to almost disappear by the end of this century in the Hida Mountains, also known as the Japanese North Alps, a research team warns.

The team of researchers, including from the Nagano Environmental Conservation Research Institute in the central prefecture of Nagano, presented the prediction in an article published in the online edition of British journal BMC Ecology on Wednesday.

Rock ptarmigans, called "raicho" in Japan and designated as a special natural treasure of the country, inhabit mountain areas at altitudes of around 2,200 meters or higher.

The team, led by Masanobu Hotta, head of the institute's natural environment department, surveyed alpine plants that rock ptarmigans eat and use for nests in central to southern areas in the North Alps, including Mount Yari and the Hotaka peaks.

The team then projected that areas suitable for rock ptarmigans in the region will plummet to 0.4 pct of the current level in 2081-2100 as the habitat areas of Japanese stone pines and two other plant species are forecast to shrink amid a possible rise of 2 to 4 degrees Celsius in the average global temperature.

The vegetation change would likely lead to the extinction of rock ptarmigans there, given that populations are unlikely to migrate from their respective home mountains, the team concluded.

"To prevent their extinction, it's necessary to take measures to protect the species, as well as to tackle global warming," Hotta said. Jiji Press