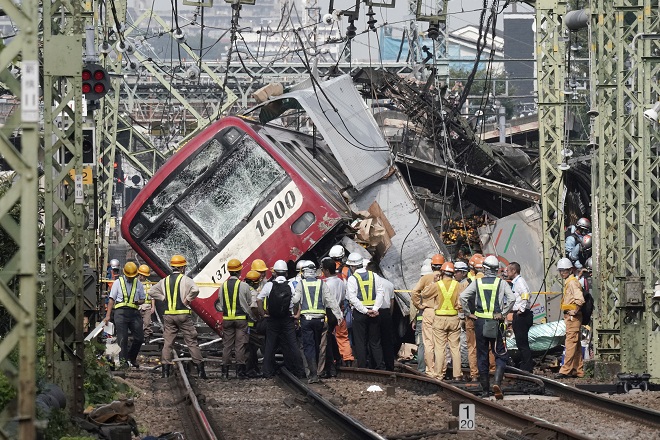 Yokohama--Keikyu Corp. <9006> is investigating whether the actions of the driver of its train that collided with a truck at a crossing in Yokohama, Kanagawa Prefecture, south of Tokyo, on Thursday were appropriate.

The railway thinks the train driver could have avoided the accident if he had noticed a warning signal from an obstacle-detecting device and applied the emergency brakes immediately, sources familiar with the situation said Friday.

The collision left the 67-year-old male driver of the truck dead and 34 people on the train injured, including the 28-year-old male train driver. The front three cars of the eight-car "kaitoku" special rapid train were derailed after colliding with the truck, which was stuck at the crossing.

The train driver told the company that he applied the emergency brakes after seeing the warning on a railway signal.

It is unclear which signal the driver saw that prompted him to apply the emergency brakes.

The railway's kaitoku trains usually run at a speed of 120 kilometers per hour, traveling up to around 600 meters until coming to a complete stop after the emergency brake is applied.

The gates of the crossing usually start to close when kaitoku trains are approximately a kilometer away. Assuming all the equipment worked flawlessly, the stalled truck would have been detected by the time the crossing started to close, triggering the railway signal placed 340 meters away and giving the driver enough distance to bring the train to a halt before reaching the truck.

Keikyu has suspended operations in both directions between Yokohama and Kawasaki stations, both in Kanagawa. It is working to remove the derailed train cars and aims to resume operations Saturday morning.