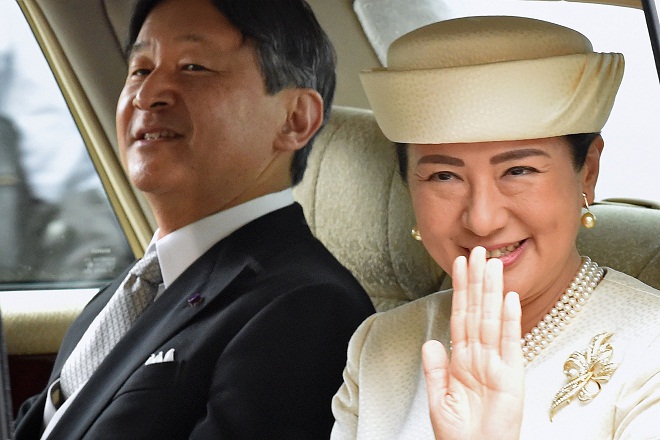 Naha, Okinawa Pref.--Tokumasa Miyagi, a 78-year-old Okinawan who lost his father in a fierce ground battle in the southern Japan prefecture in the final phase of World War II, hopes that new Emperor Naruhito and Empress Masako will inherit their parents' peace efforts.

Miyagi, head of the prefectural association of relatives of the war dead, is among about 40 Okinawans, aged between 12 and 91, who will attend an annual war memorial ceremony set to take place in Tokyo Thursday, the 74th anniversary of the end of World War II.

The ceremony marks the first of its kind since Emperor Naruhito took over the throne from his father, Emperor Emeritus Akihito, on May 1, when the country's Imperial era name changed to Reiwa from Heisei.

Miyagi was 3 years old when the Battle of Okinawa took place. His father is believed to have died around Mabuni, the venue of the last fierce fighting during the battle, but details are unknown.

He himself and his family ran about in a forest in northern Okinawa trying to escape. After the end of the war, he suffered from malaria.

Miyagi started engaging in activities related to war-bereaved families over 30 years ago. He has been delivering a memorial speech at an annual ceremony to mark the end of the Okinawa battle since he became head of the association in 2015.

In this year's ceremony in June, he said, "We'll continue activities strongly determined not to create war-bereaved families again."

Emperor Emeritus Akihito visited Okinawa 11 times, including when he was crown prince, as part of efforts by him and his wife, Empress Emerita Michiko, to pray for the victims of the war in Japan and abroad.

In a press conference in December last year, then Emperor Akihito said, "We are committed to continue to care for the sacrifices that the people of Okinawa have endured over the years, and that commitment will remain unchanged in the future."

Miyagi said he initially had "mixed feelings" about the Imperial Family, but this sense of uneasiness "has gone away gradually" as he watched the efforts of Emperor Emeritus Akihito and Empress Emerita Michiko.

He will listen to the speech of Emperor Naruhito when he attends Thursday's war memorial ceremony. "I want peace to continue in Reiwa." Jiji Press