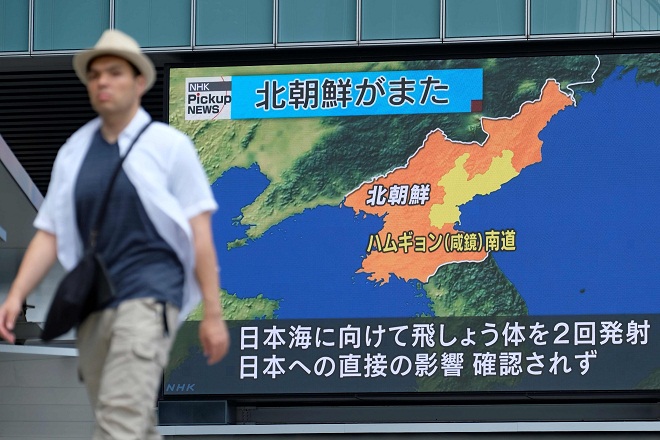 The projectiles traveled roughly 400 kilometers at a maximum altitude of about 48 kilometers, according to the military. They were short-range ballistic missiles, the South Korean presidential office said.

The Japanese Defense Ministry said that no ballistic missiles have reached the country's territory or its exclusive economic zone. The ministry does not see any imminent threat to the country's security from the launch, it said.

North Korea fired the projectiles at around 5:34 a.m. (8:34 p.m. Friday GMT) and 5:50 a.m. from an area around the eastern city of Hamhung, according to South Korea's Joint Chiefs of Staff.

The United States is aware of reports of North Korea's projectile launches, a senior U.S. administration official said in Washington. It is monitoring the situation and consulting closely with its allies Japan and South Korea, the official said.

The series of launches since July 25 were a show of frustration by North Korea over joint military exercises that the United States and South Korea began Monday, the South Korean presidential office said.