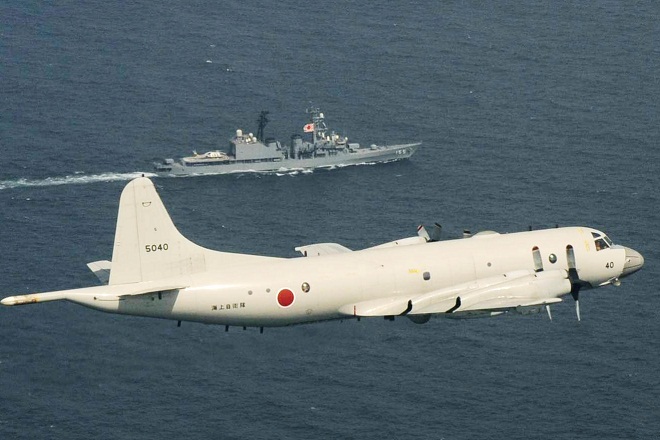 Tokyo- The Japanese government is considering multiple options for dispatching Maritime Self-Defense Force troops as part of the country's contribution to ensure shipping safety in the Strait of Hormuz, informed sources said.

The options include dispatching P-3C patrol aircraft and a destroyer that have been sent to Djibouti, northeastern Africa, under the antipiracy law, according to the sources.

These options are aimed at distancing Japan from a U.S.-proposed maritime coalition to safeguard waters around the Strait of Hormuz in an effort to prevent its traditionally friendly ties with Iran from being harmed, the sources said.

The possible dispatch of P-3C aircraft may be based on the law on the establishment of the Defense Ministry for surveillance and intelligence gathering or the SDF law for maritime patrol aimed at protecting the lives of Japanese citizens and their assets as well as policing sea lanes.

One of possible P-3C dispatch destinations is the Bab el-Mandeb Strait located between Djibouti and Yemen.

The Bab el-Mandeb Strait is an area for which U.S. Central Command has been seeking cooperation from other countries to protect commercial vessels. A deployment there "would allow Japan to help the United States save face," a government source said.

If Japan dispatches P-3C aircraft to the Strait of Hormuz, it is likely to draw a backlash from Iran. In addition, such a plan will require Japan to have a staging post, possibly in Oman, because the strait is some 2,000 kilometers away from Djibouti.

Another plan calls for reviewing the purpose of the antipiracy law to have the P-3Cs and destroyer stationed in Djibouti engage in a mission to secure the safety of sea lanes in the Middle East, the sources said.

Still, a mission in the Strait of Hormuz and waters off Oman could anger Iran and force MSDF troops to get caught up in a combat, a situation banned by Japan's Constitution, the sources said.

"Japan should decide whether to dispatch troops after holding thorough discussions on the plan's constitutionality based on a worst-case scenario," a SDF official said.

A government source said that "due to the Japan-U.S. alliance, it would be difficult for Tokyo to completely reject the request for cooperation from Washington."

"Japan is set to make a decision by balancing the need to maintain its friendly ties with Iran with its national interest," the source said. Jiji Press