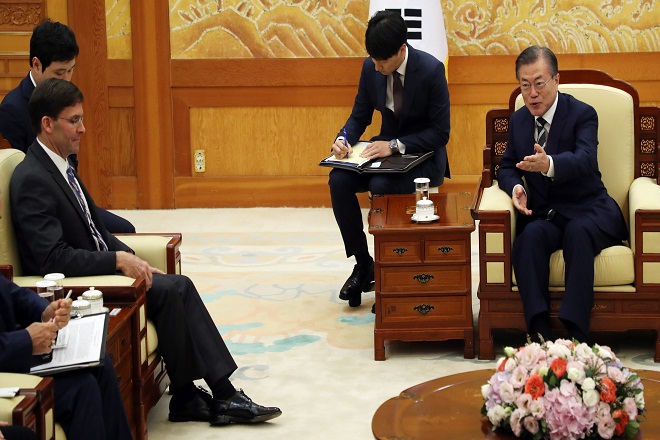 Seoul- South Korean President Moon Jae-in and U.S. Defense Secretary Mark Esper on Friday agreed on the importance of trilateral cooperation among their countries plus Japan amid tensions between Tokyo and Seoul over trade and history issues.

Moon and Esper shared the view in their meeting in Seoul, according to officials of South Korea's Blue House presidential office.

Esper is believed to have called on Moon to extend a defense intelligence-sharing agreement between the two Asian countries, informed sources said. Seoul has been reviewing the General Security of Military Information Agreement, or GSOMIA, in response to Tokyo's tighter controls on exports to South Korea.

The meeting between Moon and Esper lasted for 30 minutes at the Blue House, according to the presidential office. This is Esper's first visit to South Korea since taking office late last month.

Congratulating Esper on becoming U.S. defense secretary, Moon said that the South Korea-U.S. alliance is strong and underlined the need for supporting denuclearization talks between the United States and North Korea for a successful conclusion.

Esper said that he expects U.S.-North Korea dialogue to be resumed at an early date, according to the Blue House.

The U.S. defense secretary has suggested that he would ask Japan and South Korea to resolve the tensions early and work together on issues related to North Korea and China. In Tokyo earlier this week, Esper and Japanese Defense Minister Takeshi Iwaya met and shared the view that the GSOMIA should be extended.

In a meeting in Seoul earlier on Friday with Esper, South Korean Defense Minister Jeong Kyeong-doo claimed that Japan's stricter export regulations are causing negative effects on bilateral relations as well as security cooperation among Tokyo, Washington and Seoul.

Esper said the GSOMIA is important for the three-way security cooperation, according to South Korean media. Jeong, noting that there are some negative opinions in South Korea about the pact's extension, said that its efficacy and other factors will be considered before a decision on whether to extend it is made, according to the media. Jiji Press