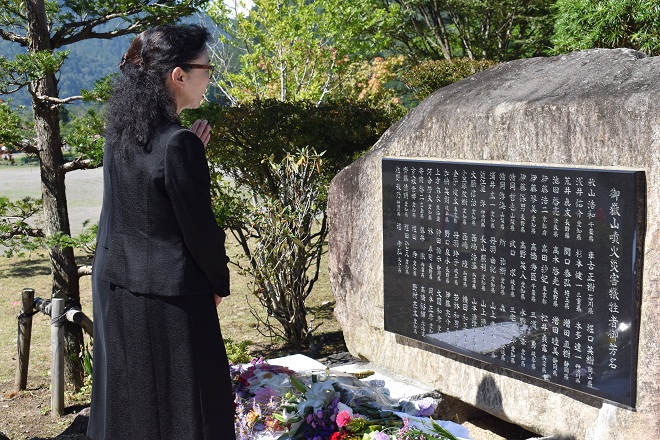 Otaki, Nagano Pref.- A memorial service was held Friday to mark the fifth anniversary of an eruption of Mount Ontake in central Japan that claimed the lives of 58 people and left five others missing.

Some 137 bereaved families, local residents and others took part in the ceremony at a park in the village of Otaki in Nagano Prefecture, at the foot of the 3,067-meter volcano.

At 11:52 a.m. (2:52 a.m. GMT), the time when the worst volcanic disaster in the country's postwar history occurred on Sept. 27, 2014, a siren wailed over the community wireless system and the participants observed a moment of silence.

"Considering the safety of people's lives to be our biggest responsibility, we vow to work on volcanic disaster prevention," Otaki Mayor Hiroshi Seto said at the ceremony, which was organized by Otaki and the town of Kiso, also in Nagano.

In a speech, Yoshinari Takagi, a 71-year-old representative of the bereaved families who lost his only son, Hiromitsu, then 37, in the eruption, said that his son was an honest person who hated anything that was unfair and was last person to tell a lie.

"We must never repeat" the volcanic disaster, Takagi said. "In order to do this, those of us who are left behind will continue to propose (measures to ensure) safety and security."

The beavered families and others then laid white chrysanthemums on an alter and put their hands together to pray for the victims of the eruption.

In the eruption, many mountain climbers and others were hit by flying volcanic rocks.

The town of Kiso lifted entry restrictions on a hiking route leading up to the top of the mountain for 13 days in September-October 2018.

This year, the town government lifted the restrictions from July to Oct. 16, enabling people to climb to the mountaintop during the summer climbing season for the first time since the 2014 eruption.

The Otaki government has not lifted entry restrictions placed above the mountain's ninth station on another route leading up to the summit. Jiji Press