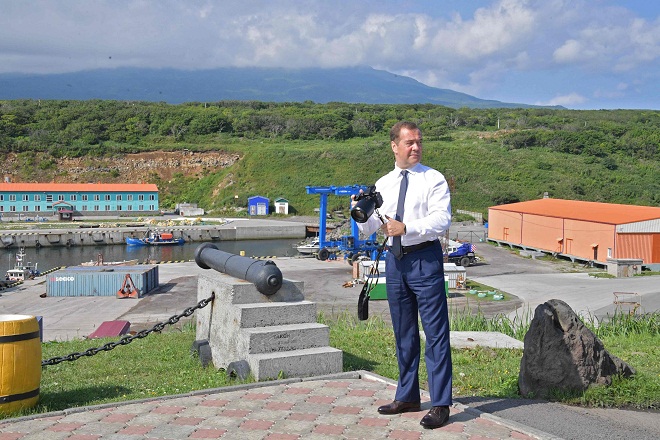 Medvedev visits one of four islands disputed with Japan

Moscow--Russian Prime Minister Dmitry Medvedev on Friday visited one of the four northwestern Pacific islands at the center of a longstanding territorial dispute between Tokyo and Moscow, Russian news agency Tass reported.

The visit to the island, Etorofu, as it is called in Japan, came in spite of the Japanese government's strong call for him to refrain from taking the move, again showing Russia's determination of making no concessions on the territorial issue, pundits said.

The development looks certain to adversely affect the bilateral relationship, putting Japan in a more difficult position and dampening its efforts to make progress in negotiations on the conclusion of a World War II peace treaty between the two countries, they said.

The four islands, known collectively as the Northern Territories in Japan, were seized from the country by the former Soviet Union at the end of the war. The territorial dispute has prevented Tokyo and Moscow from concluding a peace treaty to formally end their wartime hostilities.

Etorofu, with an area of 3,168 square kilometers, is the largest of the four. The other three islands are known as the Habomais, Shikotan and Kunashiri in Japan.

Japan lodged a strong protest against Medvedev's visit to Etorofu through diplomatic channels.

But Medvedev claimed that the islands are Russia's territory, suggesting that Moscow will not accept the Japanese protest, according to Tass.

This is the fourth visit by Medvedev to any of the four islands.

Medvedev traveled to Kunashiri in November 2010, when he was president of Russia, becoming the first Russian head of state to visit any of the disputed islands.

During the 2012 trip, he told journalists and local residents that Russia would not hand over even the slightest part of the islands to Japan.

Through the latest visit to Etorofu, Medvedev is apparently trying to stress Russia's resolve to develop the island under its sovereignty and highlight afresh the effective control of all of the islands by the country, analysts said.

In November last year, Japanese Prime Minister Shinzo Abe and Russian President Vladimir Putin agreed to accelerate the bilateral territorial and peace treaty negotiations based on the 1956 Japan-Soviet joint declaration, which called for the handover of Shikotan and the Habomais to Japan after the conclusion of a peace treaty.

Since then, however, Russia has shown no intention of compromising on the dispute.

Abe and Putin failed to make any progress on the issue at their bilateral meeting held on the fringe of a Group of 20 summit in the western Japan city of Osaka in June.

The two leaders are expected to meet again, on the sidelines of an Eastern Economic Forum meeting in Vladivostok in Russia's Far East on Sept. 4-6. Jiji Press