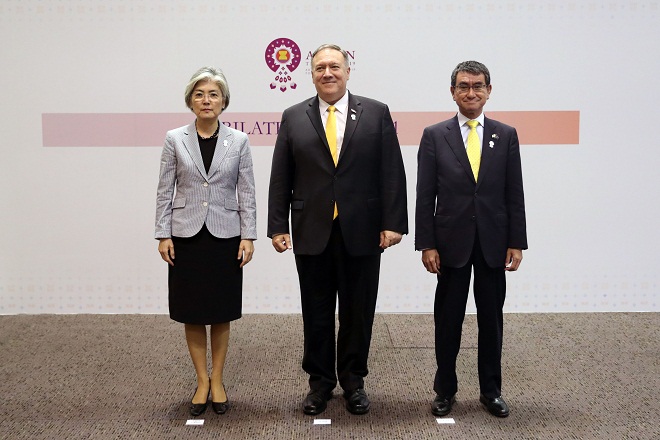 Bangkok--Japanese Foreign Minister Taro Kono traded barbs with his South Korean counterpart, Kang Kyung-wha, on Friday over the day's decision by Tokyo to remove South Korea from its list of trusted trading partners qualified for preferential treatment in export procedures.

Bringing up the issue at the opening of a meeting in Bangkok of foreign ministers from the so-called ASEAN Plus Three countries, Kang said the approach taken by Japan was unilateral and arbitrary.

She added that South Korea has serious concerns about the removal of the country from Japan's list of preferentially treated countries, which will take effect on Aug. 28.

Kono responded that he has not heard any complaints from his "friends" from the Association of Southeast Asian Nations about Japan's export control system, claiming that Japan's exports are being managed appropriately.

The meeting brought together the foreign ministers of Japan, China and South Korea as well as the 10 ASEAN member states. Jiji Press