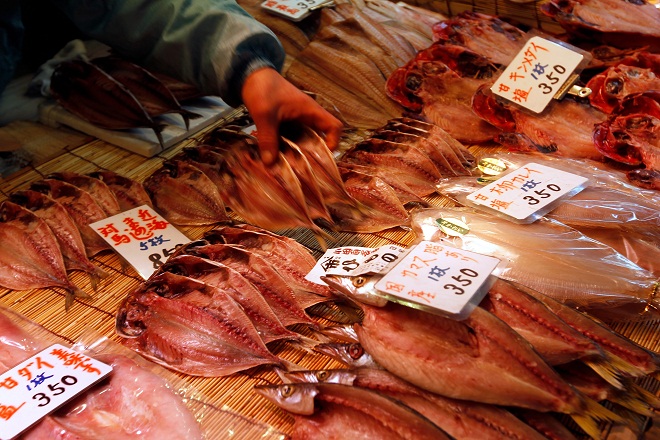 Tokyo--Heightened tensions between Tokyo and Seoul are fueling concerns in the Japanese fisheries industry about the outlook about its business with South Korea.

Industry officials think that South Korea is unlikely to lift its ban on imports of fishery products from Fukushima and seven other Japanese prefectures any time soon.

"As we can't export products to South Korea, we need to gain more fans in Japan by strengthening our product lineups and highlighting their attractions," an industry official said at a seafood trade show in Tokyo.

Sea squirts from Miyagi Prefecture were hit especially hard by the ban, as 80 pct of them were exported to South Korea. Some sea squirts in Miyagi were discarded as a result.

Japan touts the safety of these fishery products by showing scientific data. But the World Trade Organization earlier this year supported the South Korean ban.

"I have no expectations" for a resumption of fishery exports to South Korea, an exporter in Miyagi said, citing heightened tensions between the two countries.

On Friday, South Korea notified Japan of its decision to scrap a bilateral military intelligence-sharing pact.

Japan aims to achieve one trillion yen in food exports this year. South Korea is important for the goal because it is the fifth-largest export market for Japanese food.

The pace of decline is expected to accelerate. "New business deals have been suspended for some products" due to boycotts of Japanese products in South Korea, a Japanese agriculture ministry official said. Jiji Press