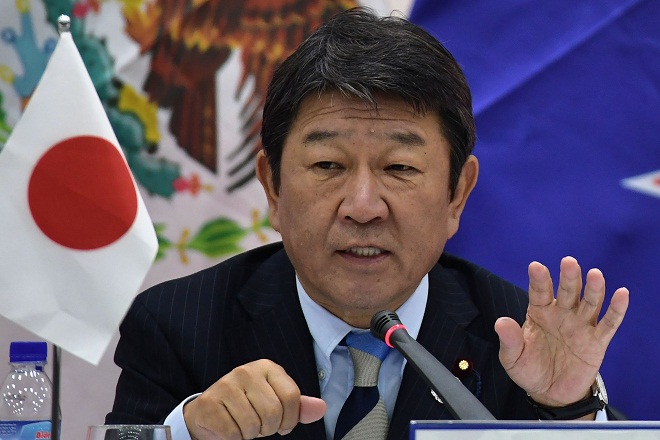 "Discussions have considerably neared a conclusion," Motegi told reporters after the second day of his talks with U.S. Trade Representative Robert Lighthizer.

"We must try hard to come up with ways" for reaching a deal, Motegi also said.

There remains a gap between the two countries over proposed tariff reductions on automotive and agricultural goods. Discussions on major points of concern are at their final stages, informed sources said.

The final push for an agreement comes as Japanese Prime Minister Shinzo Abe and U.S. President Donald Trump are set to meet on the sidelines of a three-day Group of Seven summit in Biarritz, southwestern France, from Saturday.

The two leaders are expected to discuss the trade issue based on the results of the ministerial talks. Motegi said he plans to attend the Trump-Abe meeting.

On Thursday, working-level and ministerial talks were conducted intermittently as the two sides sought to craft a mutually acceptable proposal. The deliberations were held for a total of four hours, of which about 20 minutes were one-on-one talks between Motegi and Lighthizer.

The Trump administration is demanding Japanese agricultural market liberalization on par with the levels committed under the Trans-Pacific Partnership multilateral free trade pact, which went into effect without the United States late last year.

At the same time, Washington is reluctant to meet Japanese requests for reducing automotive and other tariffs on the grounds for protecting domestic employment.

The two countries aim to strike a deal at a Trump-Abe meeting to be held on the sidelines of a U.N. General Assembly session in New York in late September. Jiji Press