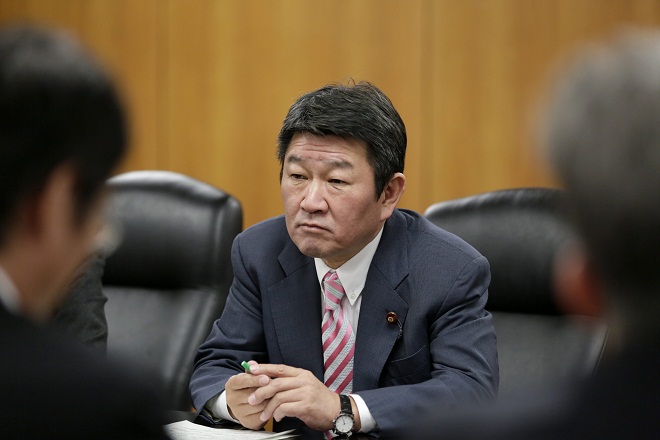 Tokyo--The Japanese government said Monday it will hold a two-day ministerial meeting with the United States in Washington from Thursday, aiming for an early deal in the bilateral trade negotiations.

Negotiations on the important items including farm products, such as beef and pork, and automobiles are expected to be tough.

The ministerial trade talks will be the first between Japan and the United States since the election for the House of Councillors, the upper chamber of the Diet, Japan's parliament, on July 21.

Both governments aim to accelerate their discussions so that they can announce results at an early date, with a Japan-U.S. summit expected for late September.

Motegi stressed the need for progress in the negotiations at a press conference Monday.

The United States wants Japan to open its agricultural market further swiftly as the environment surrounding its agricultural product exports to Japan has worsened due mainly to the enforcement of the Trans-Pacific Partnership regional free trade pact in December last year.

Earlier this month, the two countries made their positions clear at working-level talks, but the gap remains wide over important items.

The two sides aim to reach an early agreement by holding a string of meetings both at minister and working levels from August. Jiji Press