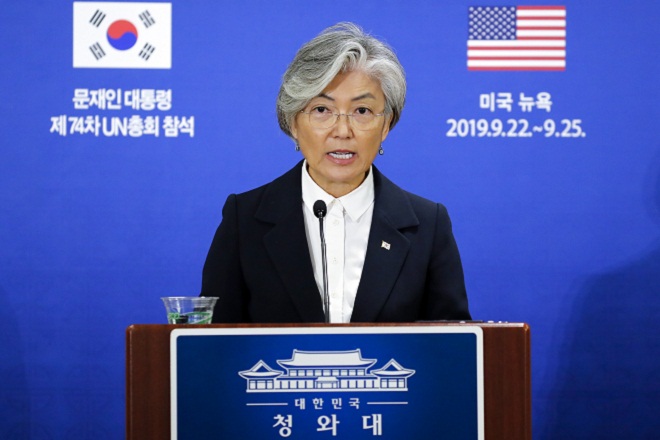 New York--Japanese Foreign Minister Toshimitsu Motegi and his South Korean counterpart, Kang Kyung-wha, agreed Thursday to continue dialogue between them and other diplomats of the two countries amid the deterioration in bilateral relations over wartime labor and other issues.

Motegi held talks with Kang in New York, meeting her for the first time since he became foreign minister in a cabinet reshuffle earlier this month.

The two countries stopped short of arranging a summit in New York between Japanese Prime Minister Shinzo Abe and South Korean President Moon Jae-in on the sidelines of the U.N. General Assembly session.

During their talks that lasted some 50 minutes, Motegi told Kang that the bilateral relationship has been tense, referring to South Korean top court rulings last year that ordered Japanese companies to pay compensation to South Koreans requisitioned to work for them during World War II.

Kang said that she wants to continue dialogue with Motegi and bilateral talks through various diplomatic channels.

They agreed to boost efforts for constructing a future-oriented relationship between the two countries and affirmed the importance of cooperation in dealing with North Korean issues.

They also exchanged views on the wartime labor issue and tightened export control procedures between Japan and South Korea as well as Seoul's decision to scrap the bilateral General Security of Military Information Agreement, or GSOMIA, which allows the two countries to share defense secrets. Jiji Press