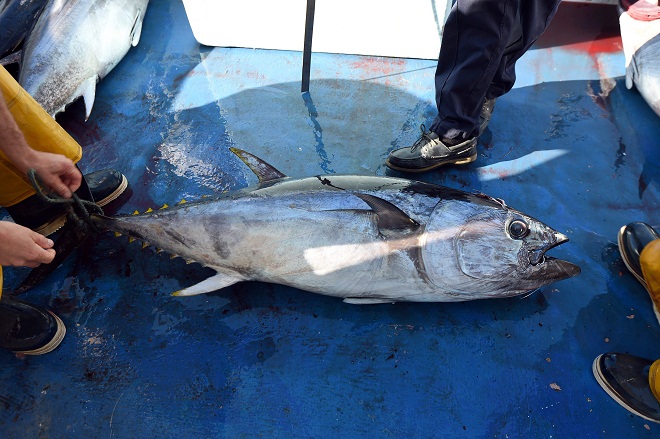 Tokyo- Japan is seen facing a headwind over its proposal to expand catch quotas for Pacific bluefin tuna at a forthcoming international meeting, as the United States is likely to reject it.

The proposal will be discussed at a four-day meeting of the Northern Committee of the Western and Central Pacific Fisheries Commission in the U.S. city of Portland from Sept. 3.

Japan calls for a quota increase of 10 pct for small Pacific bluefin tuna weighing less than 30 kilograms and 20 pct for larger tuna.

The Asian country, a major consumer of the fish, which is popular at sushi restaurants, cites recovery in the stock of juvenile fish in 2017 and 2018.

But Washington "is expected to oppose the increase," a Japanese Fisheries Agency official said. "The United States is expected to say the overall (Pacific bluefin tuna) stock remains low."

The WCPFC has 26 member economies. Ten of them, including Japan, the United States, Taiwan and South Korea, are members of the Northern Committee.

At a committee meeting last year, Japan proposed a quota increase of 15 pct for both small and large Pacific bluefin tuna. But no agreement was reached.

This year, Japan hopes to win support by reducing the margin of increase for small tuna, as fishing controls on younger fish are considered more effective in facilitating fish resources recovery.

If the current Japanese proposal is passed unanimously as it is, the country's quota for small fish would increase by about 400 tons.

For larger fish, the total quotas would increase by 1,300 tons. This amount would be split between Japan, Taiwan and South Korea.

According to the agency, resources of mature Pacific bluefin tuna capable of reproduction fell steadily from the 1961 level of 170,000 tons, reaching 12,000 tons in 2010.

The WCPFC introduced fishing restrictions in 2015. The commission aims to boost the total stock of mature Pacific bluefin tuna to 43,000 tons by 2024. Jiji Press