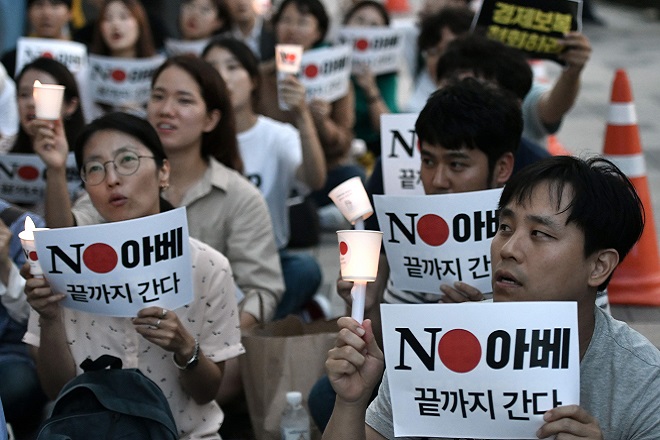 Japan firms worried about escalation of boycott in S. Korea

Tokyo--Japanese businesses are increasingly concerned about a possible escalation of the boycott of Japanese products in South Korea following Seoul's surprising decision on Thursday to scrap its military intelligence-sharing pact with Tokyo.

As the bilateral tensions have spread to the security area, "I'm concerned about the serious situation," a senior official of a business lobby said.

Economic impacts of the frayed ties are becoming evident, in the forms of the boycott of Japanese goods in South Korea and the falling number of South Koreans visiting Japan.

"A focal point is whether and to what extent the ever-growing tensions will affect the activities of consumers," an official of a Japanese automaker said. "We'll continue to pay close attention to whether the latest development will fuel the boycott," the official added.

Sales of Japanese automobiles in the South Korea market are showing signs of decreasing.

"I have no choice but to say I hope that the issue will be resolved by the Japanese and South Korean governments," an official of a major machinery maker said, referring to South Korea's decision not to renew the general security of military information agreement, or GSOMIA, with Japan.

A meeting between Japanese and South Korean business leaders is scheduled for late September. The Japan Business Federation (Keidanren), the biggest group of employers in Japan, and the Federation of Korean Industries are slated to hold a regular meeting in November.

Still, the Japanese business circle is increasingly cautious about the possibility of the Tokyo-Seoul tensions escalating out of control. Jiji Press