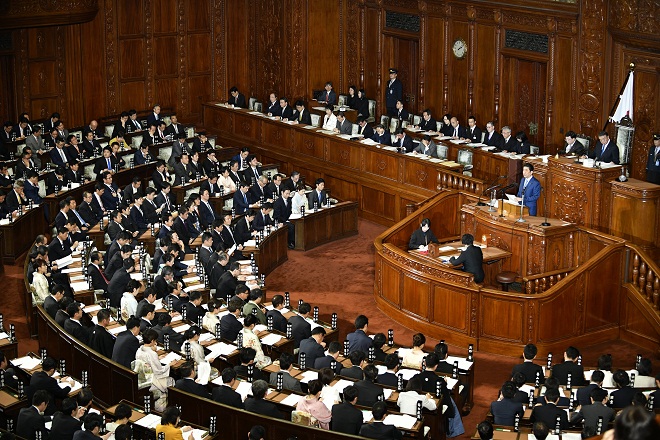 Tokyo--The Diet, Japan's parliament, convened on Thursday for a five-day extraordinary session, following the July 21 election for the House of Councillors, the upper chamber.

At a plenary meeting in the morning, the Upper House elected Akiko Santo, a member of the ruling Liberal Democratic Party, as its president, and Toshio Ogawa of the major opposition Constitutional Democratic Party of Japan as vice president.

In the afternoon, the House of Representatives, the all-important lower chamber, will hold a plenary meeting to allocate seats to its members and set up special committees.

An opening ceremony will then be held with the attendance of Emperor Naruhito, who will give his first speech at the Diet since he ascended the throne on May 1.

No debate on legislation will be held during the session. Full-fledged deliberations will take place at a separate extraordinary Diet session, seen starting in October.

Among newly elected Upper House lawmakers, Yasuhiko Funago and Eiko Kimura of new political party Reiwa Shinsengumi, both having severe disabilities, made their first attendances at the Diet on Thursday in wheelchairs.

Kimura, who has paralysis below the neck, used an electric wheelchair to pass through the Diet's main gate, where she was greeted by about 100 supporters with applause.

Funago, who has amyotrophic lateral sclerosis, or ALS, a progressive neurodegenerative disease, climbed a slope newly placed at the Diet building's central entrance in a large wheelchair rolled by a helper.

The two rookie lawmakers then arrived at spaces in the Upper House chamber created for them by removing the fixed seats.

The work to make the Upper House barrier-free for Kimura and Funago was completed on Wednesday, barely in time for the start of the extra Diet session. Jiji Press