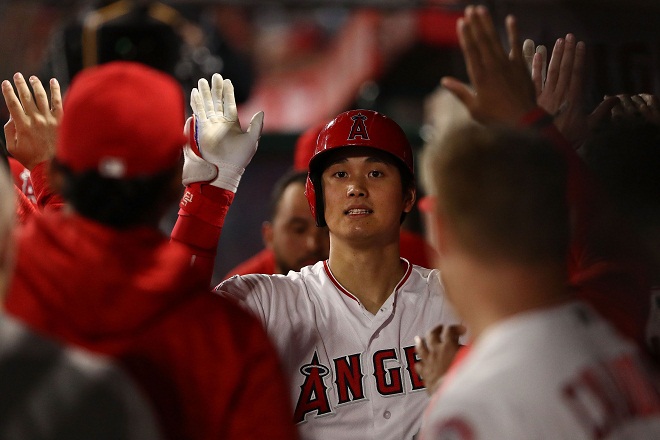 Tokyo--Japanese baseball star Shohei Ohtani has expressed a desire to play in the World Series, after his successful major league rookie season with the Los Angeles Angels.

Speaking in an interview with Jiji Press in Tokyo on Tuesday, the two-way sensation said he "really enjoyed" his first season that earned him the 2018 American League Rookie of the Year award.

After a stunning display as a pitcher-slugger, Ohtani, 24, played solely as a hitter late in the season after damaging his right elbow. He underwent Tommy John surgery on Oct. 1, a day after the end of the regular season, to repair the ulnar collateral ligament injury.

The Angels came in fourth place in the American League West, finishing the season in September. Ohtani said he watched playoffs the following month on television after having the surgery.

"The teams going to the World Series have one more month to play," Ohtani said. Watching the series on TV with a cast on the right elbow "made me want to play baseball until late October," he said.

Ohtani will play the entire next season as a batter, as at least a year of rehabilitation is needed for him to play again as a pitcher. It is not known when he can return to the mound.

"I guess there are difficulties in playing the two roles (as a pitcher and hitter) at the same time and also in being at bat for a full season," Ohtani said.

"I'm not sure whether it will work or not, but it would be a good experience for me as both pitcher and batter," he said.

As for rehabilitation, Ohtani said he has made steady progress. His rehabilitation program includes bending and stretching of elbows using a light weight, he said.

While still unable to throw a ball or swing a bat with full force, Ohtani's desire to become a better player has not changed even in the long, dull process of rehabilitation.

"There are some practices that I can do now," he said, citing one to check his batting form. Jiji Press