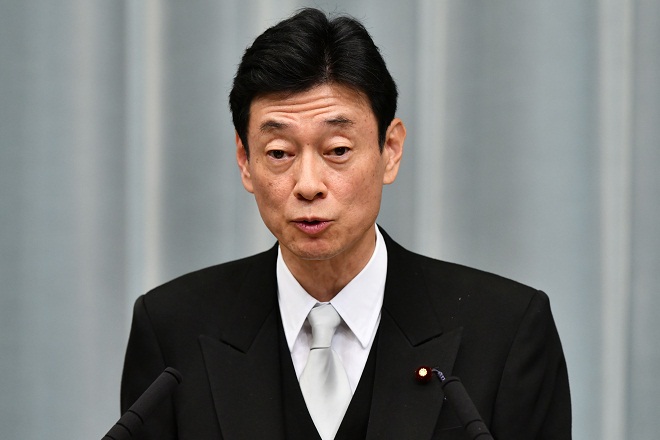 Tokyo- Japan's new economic revitalization minister Yasutoshi Nishimura has vowed to take all possible measures to keep the domestic economy afloat after the planned consumption tax increase from 8 pct to 10 pct on Oct. 1.

"Demand is solid at home, but weak abroad," he said in an interview with Jiji Press and other media organizations, adding that overseas risks, such as trade issues and Britain's planned exit from the European Union, require close monitoring.

"We'll fully explain to the public measures aimed at easing the pain of the consumption tax increase, such as keeping the tax rate at 8 pct for some products and issuing gift certificates with 'premium' coupons to certain households," he said. If these measures gain understanding, negative impacts of the tax hike on the economy can be minimized, Nishimura said.

"If changes occur in economic conditions (after the tax hike), we'll act firmly without hesitation," he emphasized. "We're fully committed to appropriate economic management." Nishimura took up the ministerial post in a cabinet reshuffle carried out by Prime Minister Shinzo Abe earlier this month.

Nishimura noted that a last-minute surge in demand ahead of the consumption tax increase is believed to have not been large compared with that observed before the tax rate was raised to 8 pct from 5 pct in April 2014. Domestic demand will unlikely take a sharp downturn after the upcoming tax increase, he added.

On fiscal reform, Nishimura stressed the need to return to the "three arrows" of the prime minister's "Abenomics" policy mix, saying, "Fiscal consolidation will be impossible without economic growth."

"The government aims to promote deregulation while trying to help boost productivity through investment in such areas as information technology and artificial intelligence," he said.

Japan wants to play a leading role in promoting the Trans-Pacific Partnership free trade pact among Japan and other countries, which took effect late last year, by providing related information to parties interested in the framework, he suggested.

Meanwhile, Nishimura said it would be difficult for the United States, which withdrew from the TPP framework in early 2017, to return to the free trade pact.

Referring to domestic support related to an envisaged bilateral trade agreement between Japan and the United States, he said the Japanese government will launch countermeasures if necessary based on the results of the ongoing negotiations, which are in the final stage. Jiji Press