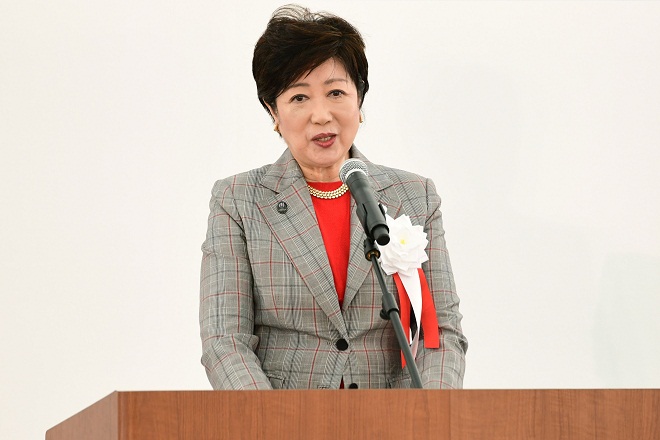 Tokyo--Tokyo Governor Yuriko Koike expressed Wednesday her hopes of leaving a barrier-free city as a legacy of the 2020 Tokyo Olympic and Paralympic Games, about a year before the quadrennial sporting event.

"In 2035, one out of three people in Japan will be elderly, aged 65 or older. Barrier-free is an important perspective for urban development in Tokyo, where the number of elderly will increase," Koike said in an interview with Jiji Press.

"The Paralympics will be a good opportunity (for expanding barrier-free facilities) and legacies will surely remain," Koike said.

Meanwhile, traffic congestion is one of the challenges for the 2020 Games. The Tokyo government plans to take measures to relieve congestion during the event, including staggered work hours for metropolitan government workers.

For five days from Monday, Tokyo government workers will review the effectiveness of such measures, including by not using public transportation during morning rush hours.

As one of her achievements since taking office in 2016, Koike pointed to a decline in the number of children on waiting lists for nursery schools.

Koike will mark her three-year anniversary as Tokyo governor next month.

On whether she will run for a second term next year, Koike said, "What I must do now is invest for the future" as Tokyo governor. Jiji Press