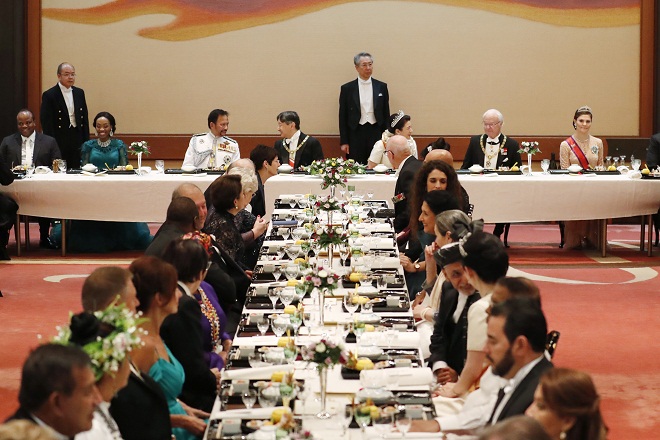 Emperor Naruhito, Empress Masako and other Imperial Family members dined with about 250 foreign guests, including Britain's Prince Charles, who attended the ceremony to proclaim the Emperor's May 1 accession to the throne.

For the "Kyoen-no-Gi" court banquet, Emperor Naruhito in a tailcoat wore decorations including the Collar of the Supreme Order of the Chrysanthemum. The Empress was in a white long dress and wore a tiara.

At the "Take-no-Ma" audience room, the couple greeted arriving guests such as foreign heads of state and the leaders of Japan's administrative, legislative and judicial branches including Prime Minister Shinzo Abe.

The banquet started in the "Homeiden" state banquet hall around 9 p.m. (noon GMT). Sitting next to the Imperial couple were Brunei Sultan Hassanal Bolkiah and Swedish King Carl XVI Gustaf, who have held their titles for longer than other foreign dignitaries.

The guests were served with "washoku" dishes featuring delicacies from land and sea.