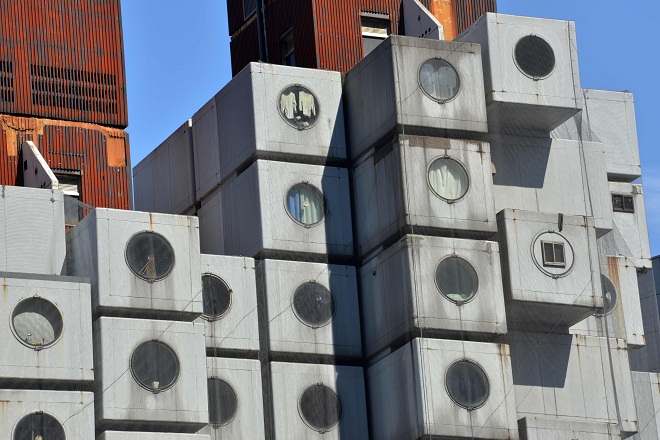 Fate of Tokyo’s Nakagin Capsule Tower to be decided shortly

Tokyo--The fate of Tokyo's famed Nakagin Capsule Tower is set to be decided as early as autumn, attracting attention from home and abroad on whether the building and its unique exterior will be kept or scrapped.

Currently, a foreign company is holding negotiations on acquiring the building in the upmarket Ginza district, seen concluding shortly.

The building, completed in 1972, is a 13-story complex made of 140 independent housing module capsules. It is one of masterpieces of the late Japanese architect Kisho Kurokawa, known as one of the leaders of the postwar architectural movement called metabolism.

Nakagin Integration Inc. last year sold the title to the land used for the building to a real estate company, according to Tatsuyuki Maeda, 52, who owns some of the capsules and heads a preservation project for the tower.

The real estate company at one time considered reconstruction for the building, opening the possibility of the tower being demolished.

Based on a proposal from Maeda, a foreign company started negotiations with the real estate firm on acquiring the land.

The building attracts visitors from across the world, with some 250 people attending tours held in English and Japanese per month.

Before the law on "minpaku" private lodging services took effect in the country in June 2018, the Nakagin Capsule Tower was popular among rooms offered by lodging service broker Airbnb Inc.

With no application made under the minpaku lodging service system, however, the tower is not an authorized lodging facility. Still, some of the capsules are available for rent under monthly contracts. Jiji Press