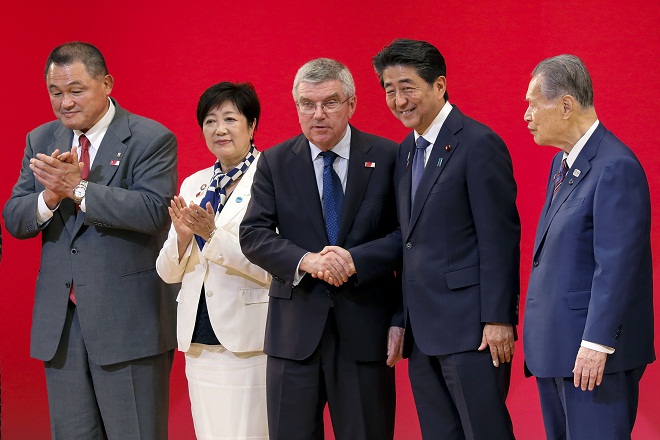 Tokyo--A ceremony to mark exactly one year before the start of the 2020 Tokyo Olympic Games was held in Japanese capital on Wednesday.

The ceremony was attended by about 4,000 people including junior and senior high school students from Tokyo as well as the northeastern prefectures of Iwate, Miyagi and Fukushima, struck by the March 2011 major earthquake and tsunami.

"I have never seen an Olympic city as prepared as Tokyo with one year to go," International Olympic Committee President Thomas Bach said at the ceremony. "It will be a wonderful and unique moment for our gracious Japanese hosts to show the world the best of Japan: your rich history and traditions, your cutting-edge innovation, your culture of hospitality, and, of course, your love for sport."

Bach handed official invitations for the Tokyo Games to the presidents of the national Olympic committees of countries such as Japan, Greece and the United States, as well as to the Chef de Mission of the IOC Refugee Olympic Team.

Japanese Prime Minister Shinzo Abe, who attended the ceremony as a guest, said: "Sports connect the world. I want to make next year's games an opportunity to showcase this fact to the world."

"I believe the Tokyo 2020 Games will be passed down to the next generation as an important turning point in Olympic history," Yoshiro Mori, president of the Tokyo organizing committee, said.

Tokyo Governor Yuriko Koike promised to welcome athletes and audiences with world-class air quality and safety, and high-quality tap water, as well as pledging to improve accessibility in the city. Jiji Press